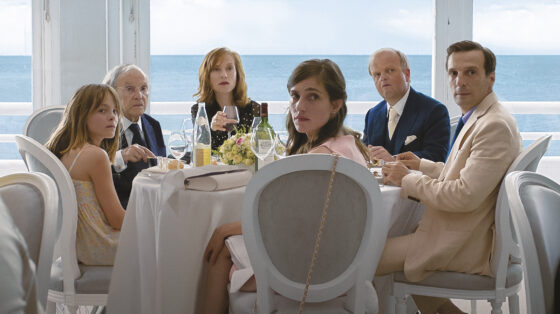 It should go without saying at this point that the title of Austrian miserablist Michael Haneke’s new film is a cruel joke–, and an unsurprising one at that. What’s more unfortunate than the forced irony, however, is that just as the title seems to have been spit out by an art-cinema name generator, so does the movie itself play as something of a parody of Haneke’s past accomplishments. Ostensibly a family drama set against the backdrop of the European refugee crises (or so the logline reads––in most respects this is a strangely noncommittal film for a director who’s previously tackled thorny political issues head on), Happy End soon reveals itself as something several times more anti-climatic: a sequel to the director’s Oscar-winning euthanasia drama Amour (2012).

When we last met Georges Laurent (Jean-Louis Trintignant), he was snuffing out his wife (Emmanuelle Riva) with a pillow; now he wants in on the action, so seemingly miserable is his continued existence and relationship with his two grown children, Anne (Isabelle Huppert) and Thomas (Mathieu Kassovitz). The latter’s young daughter, Eve (Fantine Harduin), has come to Calais to live in the family’s lavish estate following the near-death of her unseen mother, whose injuries, it’s suggested, Eve may have inflicted. Sensing a willing accomplice for his own demise, Georges begins to bond with Eve over their mutual preoccupation with death. Other characters and stories skirt the periphery of the narrative, but none come forth as fully as the one concerning the patriarch and the pubescent’s potentially fateful meeting of the minds.

To that end, Happy End is an intriguingly cryptic film. It begins, in an apparent callback to (or update of) Benny’s Video (1992), with an extended scene of uncontextualized webcam, cell-phone, and surveillance footage, equal parts mysterious and macabre. The interests and motives of many of the extended family are disclosed discretely, when at all (we come to find out that Happy End is also something of a soap opera), while cinematographer Christian Berger’s crisp images arrange visual information in a subtle manner reminiscent of his estimable achievements with Caché (2005). That said, laying the problems currently plaguing Europe at the feet of technology is about the least profound statement one could make in 2017, just as the director’s predictably bleak take on bourgeois entitlement feels increasingly tired and overly calculated, becoming less and less interesting as the particulars of the narrative eventually come into view. That in the end the final piece of the puzzle doesn’t fall into place is, I suppose, the joke––except that I found myself rolling my eyes rather than laughing.