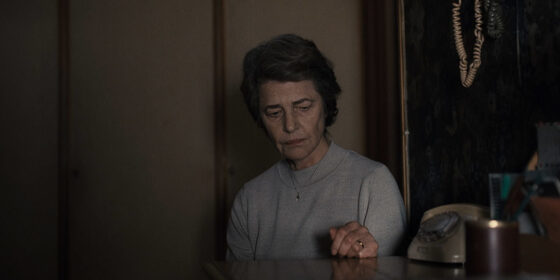 Hannah is a bit of a paradox: it is an exceedingly quiet movie, and at the same time a bracing one, with a volatile, superstar performance at its heart. Charlotte Rampling plays the title character, a woman whose life has been dramatically upended just as she and her husband (André Wilms) should be settling into their mundane golden years. Instead, he has been sent to prison, and Hannah, while initially playing the supportive wife, becomes increasingly uncertain of her role.

In fact, this is a film with performance at its core. Hannah is a housecleaner, and she also belongs to a theatre troupe. She behaves as if she were a loving surrogate parent to the little boy where she works. She runs lines with other actors that sound eerily close to the words she perhaps ought to be speaking in her real life. And although this symbolic operation has every chance to be ham-fisted, it never is, thanks to Rampling’s subtlety and the sharp, minimalist direction by Andrea Pallaoro.

This is indeed a director to watch. With his chilly fixation on the unsaid, and his focus on Hannah’s small domestic universe, Pallaoro is very clearly influenced by both Michael Haneke and Chantal Akerman. And yet, even as these forebears are impossible to miss, Hannah feels very much like an original statement on shared guilt, self-deception, and the role of routine in staving off unwanted discovery. This is an imperfect film—some of its secrets are perhaps more apparent than Pallaoro wants them to be—but it is quite good.