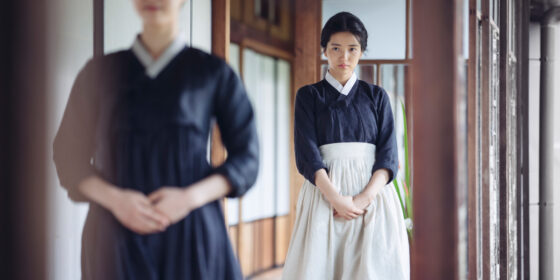 Park Chan-wook dresses up his naughtiness under the ritzier coats of period drama and metafiction in The Handmaiden. More well-oiled machine than movie, The Handmaiden adapts Welsh historical novelist Sarah Waters’ Booker Prize-shortlisted 19th-century throwback Fingersmith, about a petty thief commissioned to act as a maid to a mentally unwell heiress, the better to seduce and betray her. Though he trades the novel’s setting of Victorian England for 1930s colonial Korea—a shift that pays off nicely in linguistically codifying the central trio’s surprising power plays and acts of gamesmanship over one another—the novel makes plum material for a filmmaker who’s always been drawn to pulpy psychosexual revenge stories with a veneer of respectability and sophistication.

It goes without saying that Park makes the text his own, though the accumulating perspectival shifts, voyeuristic gazes through peepholes, and academic eroticism puts him even more firmly in Hitchcock via De Palma territory than usual. Like his English-language debut Stoker (2013), though, the narrative and characters can feel like a clothesline on which to hang dubious aesthetic flourishes, like a garish close-up of one of our usually cagey leads in an otherwise intimate, unguarded moment, or the repeated sight of a perverted villain with an ink-blotted tongue—corporeal proof of his bad dealings with dirty books.

Those gauche touches are an ungainly fit for the otherwise highly manicured, meticulously art-directed and well-framed proceedings, but it’s the tastefulness and restraint that feel more out of character. Park can’t seem to decide whether he wants to make an earnest, Notorious-riffing love story about a woman falling in love with her mark in a politically inconvenient time and place, or a chintzy lesbian potboiler by and for straight spectators who would likely see the mere presence of an extended sex scene between women as illicit viewing. His compromise—a tastefully arranged melodrama with elements of kitsch—is as incoherent as it is fetching.