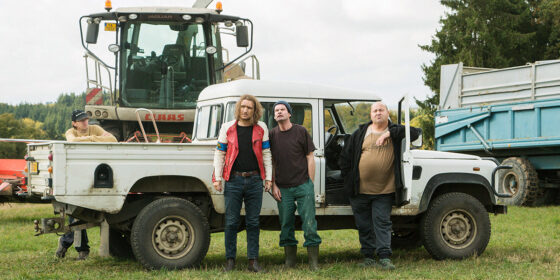 To have lost something is for something familiar to have disappeared, but to be lost is to be surrounded by the unknown—in other words, to have the unfamiliar appear. Jens Fauser (Frederick Lau) is lost in both senses of the word, shedding layers of his former self just as readily as he is engrossed by a new job, a new lover, and the community of Schandelsmillen, a small village just off the border between Germany and Luxembourg. Upon first impression, Gutland seems like a rustic but warm film about life in the European countryside; its assured cinematography equally sensitive to the particularities of 35mm when shooting the vast and shimmering wheat fields as it is in its dim but sultry domestic spaces. Yet little by little, the film’s air of social realism is distorted with touches of surrealism, as the sinister histories of both the town and its newcomer start to reveal themselves. As it turns out, the only way for Jens to avoid being found by the shades of his past is for him to “be found”— in the spiritual sense—and embrace this new identity he is being coerced into.

Despite some recognizable tropes of small-town transgressions and cultish persuasions, director Govinda Van Maele proves his skill through a subtle but palpable escalation of tension. Suspense is built through increasingly ardent sex scenes and chilling trumpet rehearsals—eccentric but accurate indicators of Jens’s full-fledged transformation. When we see him up there with his instrument, stoically and relentlessly hitting all the right notes, he has never looked so lost, and at the same time so found.