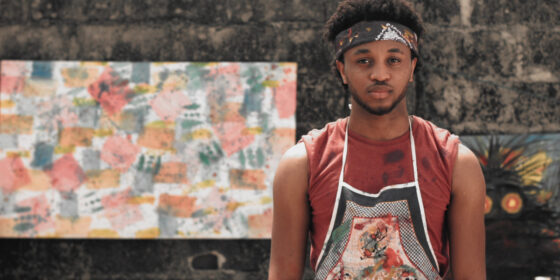 Despite its patently patriotic title, Green White Green is surprisingly uncertain about what it means to be Nigerian. Beneath an almost prankish, David Attenborough-esque voiceover that sets up the sociopolitical backdrop, the film explores the potential of a new generation of young visionaries—imagine American Graffiti (1973) reworked as an articulation of contemporary Nigerian culture. The mosaic-like structure playfully juxtaposes a plethora of influences from both American blockbusters and the prolific Nollywood industry, a tactic that also extends to a richly diverse soundtrack that combines Beethoven’s Für Elise with modern techno pieces, as well as the script’s  occasional offhand reference to Major Nzeogwu and Kim Kardashian alike. At times, Green White Green plays as a satirical stab at the self-styled, straight-to-video aesthetic that has proven workable for African filmmakers and popular among national audiences, while other segments seem merely amateurish down to their overacting, wonkily elliptical editing, and unpolished sound design. That Green White Green’s technical competence often resembles that of the students short film -within-the-film of the same name can be one of its charms—and a recurring inside joke for director Abba Makama to mine, like when the self-proclaimed director/executive producer/writer/lead actor/boom-mic operator forgets to take the lens off his camera before shooting. In spite of the intellectually undercooked coming-of-age storyline and the blaring clichés where fine art-inspired beasts symbolize national corruption, the film’s patriotism admirably  aims beyond entertainment and makes use of the available tools, adequate or otherwise, to establish a cinematic identity of its own.