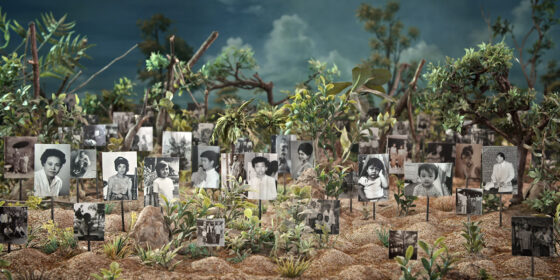 Late in Rithy Panh’s elegant successor to The Missing Picture, which more squarely faces his own family losses in the Cambodian genocide of the late ’70s, the filmmaker’s longtime surrogate narrator Randal Douc wonders if he has shot so many images of death in order to forget that he himself is dead. At the risk of being clichéd, you could say that the film lingers in the ambivalent and surreal space that question opens up, considering the utility of image-making and storytelling as ways of animating the dead or providing some kind of solace to the living. Panh’s inquiry into what it means to endure when one’s relations have been indiscriminately killed and strewn through the landscape without dignity or ceremony is structured according to this logic of paradox, earnestly grappling with both the futility of telling a presentist story about past traumas and the compulsive, melancholic need to do so anyway.

As in his earlier work, Panh’s film is steeped in the language of continental philosophy and trauma studies, revelling in Derridean epithets: the offscreen narrator alludes to his work of “impossible mourning” and deems the Khmer Rouge’s genocidal methods the product of “an ideology that wanted to exterminate extinction.” In spite of this heady context, this potentially clever essay film about making essay films in lieu of burying one’s dead works on an instinctive and not just intellectual level, taking in and, as a rule, not editorializing about the spectrum of ways people attempt to find peace in the face of unspeakable horrors. There is a delicacy to the way Panh frames, juxtaposes, and sometimes attempts to imitate through cinematic means the distinctive mourning customs of his subjects.

Though Panh revisits the clay effigies from The Missing Picture, and frequently superimposes a range of death masks, totemic objects, and old photographs onto images of the present-day Cambodian countryside in ways that can sometimes feel pat or overly universalizing, most of his efforts are focused on listening to testimonies and prayers from victims as well as participants in past atrocities, and waiting for the dead to reveal themselves with only the faintest and most respectful efforts to tease them out, as when he abruptly pans the camera to mimic a prayer ritual that involves looking in different directions in hopes of hitting on where the dead might lie. It’s to Panh’s credit that this registers as a humble effort to see if his own aesthetic and philosophical toolkits might help illuminate the peculiarly Cambodian trauma response, distinct from PTSD, called baksbat, rather than as a filmmaker’s vain efforts to put his own nonfiction methods above those of the locals who dwell every day on haunted ground.