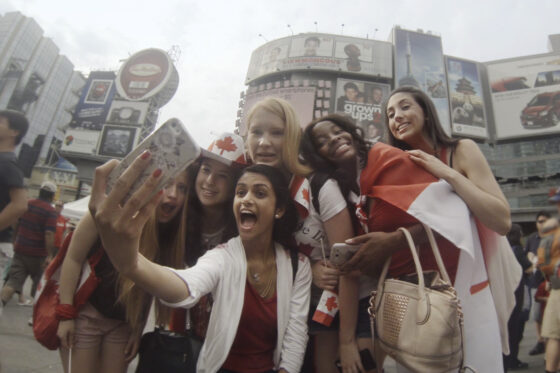 Spice It Up screens at TIFF Bell Lightbox on Thursday, August 15 as part of MDFF Selects: Presented by Cinema Scope and TIFF.

“Spice what up?” a film professor played by Cinema Scope’s own Adam Nayman asks with disinterest early in Lev Lewis, Yonah Lewis, and Calvin Thomas’ smart and puckishly funny new film, seemingly pleased with himself for having come up with any constructive criticism at all. It’s a question that might feel painfully familiar to any critic who’s wondered where to start with a cryptic text, as well as to any artist who’s found themselves translating intuitive creative decisions into more easily digestible soundbites for the literal-minded. And it’s posed, to us as well as to the listener on the other side of his desk, in response to the title of the experimental thesis by film student Rene (Jennifer Hardy), whose work the professor later confuses for that of another classmate’s while praising her film’s apparent evolution toward “a coherent ideology, or a lack of ideology”—the kind of useless feedback that at least covers all the bases.

These moments of squirmy office-hour comedy about the intense vulnerability of soliciting feedback on a work in process offer a window into Spice It Up’s sly, offhanded complexity. Whatever the title refers to—a desire to punch up the mundane into the fantastic, perhaps, or an oblique reference to a dance routine the characters in Rene’s film-within-the-film are practicing—Spice It Up proves a beguiling and tricky film about the minutiae of making and showing films, and coming into oneself as an artist in the process, in Toronto’s sometimes hostile and typically male-dominated film scene.

In her professor’s defence, Rene’s film—which she’s apparently been working on for years, with a cast who have since moved on to bigger (or at least better-paying) things—is hard to get a grip on. It’s an aesthetically and politically varied kitchen sink of a thesis that appears to hold all her disparate interests and some of her life history together, as thesis films tend to do. It evolves as she evolves, though it doesn’t necessarily become more narratively straightforward (or marketable) as a result of its author’s cumulative wisdom. For the most part, we’re left to decide for ourselves, from moment to moment, whether the project’s too-muchness is a bad thing for a student film (as her professor seems to think), or whether there might be something freeing and honest in the inchoateness of Rene’s approach, as opposed to the more polished-looking work her supervisor briefly mistakes hers for.

Doled out incrementally throughout the film we’re watching (and drolly introduced via a full credit sequence running on a laptop moments after we’ve seen the film’s actual credits), the Spice It Up within Spice It Up seems to be a fabulist political fable-cum-screwball comedy about seven young women who decide to enlist in the army after collectively flunking out of high school. (In a brief sequence that’s possibly dreamed by these young women who feel they deserve better, we see their teacher, another bored male authority figure, brazenly stamping Fs all the way down a report card cover sheet.) Rene—and, at one metafictional remove, the filmmakers—has an eye for absurd, often beautiful compositions within the incongruously low-grade GoPro footage: they shoot the women in exaggerated, comic configurations, spilling across the sides as well as the depths of the screen. The performers synchronize their movements, from checking their phone to doing drills to dancing, as though they’re in a musical. From what we see, Rene’s Spice It Up is a quintessential student film in its unruly contradictions, as the focus on a troupe of girlish young women in pursuit of the most hypermasculine endeavour they can think of might suggest. It’s fresh, low-tech, borderline incoherent, evocative of everyone and everything from Snow White and the Seven Dwarfs to Beau travail.

Though the filmmakers’ style in the framing narrative has a brass-tacks realism that sets it apart from Rene’s more heightened aesthetic sensibility, we’re invited throughout to wonder where one Spice It Up ends and the other begins. The filmmakers, rather than looking down with smug satisfaction on the burgeoning director from their own more secure positions—given the fact that, between them, they now have a number of critically well-received features to their name, including Amy George (2011), The Oxbow Cure (2013), and The Intestine (2016)—respect Rene’s process, as well as her frustration at the lonely work of executing the best possible version of a project that is destined to be filed away as one woman’s esoteric personal statement, if it is seen at all. In one especially understated and lovely moment, we follow Rene’s gaze to a screen where her film is being projected , taking in her own images through the elongated lenses of her eyeglasses after a tentative date has just awkwardly bailed on her screening, which he could hardly get through. Looking through her glasses, one feels a palpable longing for her work to be viewed outside of the blinkered conditions in which these uninterested men keep seeing it. The filmmakers subtly rhyme that point with an uncomfortable sequence in the film-within-the-film where Nirvanna the Band the Show’s Matt Johnson plays a photographer who at first bumblingly and then slickly turns the would-be girl soldiers’ need for passport photos into a grotesque casting-couch session. Throughout the film, women are at once casting their own images and having them immediately filtered through less generous, sometimes violent male viewfinders.

It’s a testament to Hardy’s nimble and grounded performance that we understand Rene’s investment in this material without her having to elucidate it. Hardy makes Rene accessible enough to identify with when she’s tasked with explaining the project and inscrutable enough to plausibly be the artist behind this unruly project. A quiet performer who the filmmakers frequently shoot in reaction shots as she takes in what other people think of Rene’s work, Hardy alternates between chastened and defensive in the company of these male interlocutors. She’s just as credible in a late sequence where she meets up with one of her lead actresses, who complains that she and the other women haven’t seen any of the footage over the years, and haven’t so much as had their TTC fare reimbursed: suddenly, there’s a bullish note to Hardy’s performance that we haven’t seen before, as she physically manipulates her former actress into a pose, and even sneaks after her to get clandestine footage of her leaving, just in case she can use it later. Spice It Up’s uniqueness lies in the filmmakers’ knack for balancing these flinty moments about the unsavouriness of filmmaking and filmgoing, as well as the hyper-specific jokes about the Toronto film scene, with real tenderness, understanding, and respect—not only for Rene, but also for her characters, and finally for something more amorphous: her work.