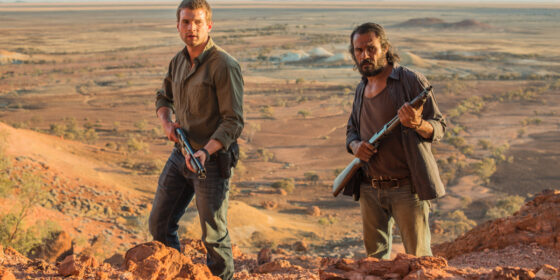 The eponymous setting of Ivan Sen’s Goldstone—the director’s follow-up and loose sequel to Mystery Road (2013), which sees the return of Indigenous detective Jay Swan (Aaron Pedersen)—is a small Outback Australian locale that’s less a town than a palimpsest. Within the tenuously bordered area and its scattering of dilapidated shacks, caravans and demountable abodes, Swan is tasked with investigating the disappearance of a young Chinese migrant worker, and in the process quickly discovers all manner of corruption and nefarious activity. As a genre exercise, Goldstone is sketchy and cliché-filled; with its tossed-off subplots involving shonky mining deals, sex trafficking and alcohol smuggling, it resembles a TV season’s worth of developments condensed maladroitly into feature length, even as its pace remains languid. Since his 2002 debut Beneath Clouds, Sen has remained a dedicated chronicler of the Indigenous Australian experience, particularly pertaining to rural areas which, though remote and underpopulated, nonetheless take on a microcosmic quality. For all of Goldstone’s plot mechanics, Sen is evidently more engaged with the setting itself and its totemic role as a transitory, ill-defined outpost of neoliberal activity, taking place against a land whose ancestors and their descendants (embodied by Swan) have been systemically dispossessed. There are potent ideas and moods floated here, but the film’s vision of racial harmony is offset by the manner in which it marginalizes Swan in favour of his white partner Josh (Alex Russell). Finally, it’s capped off with a perfunctory action climax that is well staged, moderately rousing, and a betrayal of the relative thematic complexity and ambition that has preceded it.