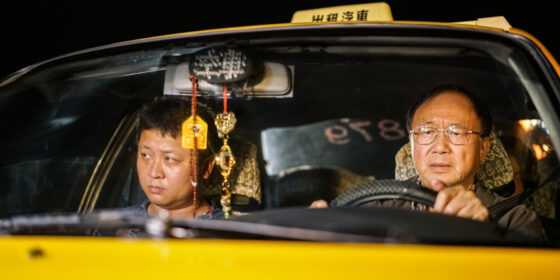 Hong Kong comic idol Michael Hui defined Hong Kong comedy (and, to a large extent, a specifically local Hong Kong Cantonese identity) in the late 1970s and 1980s with classics like The Private Eyes, Chicken and Duck Talk, and Teppanyaki. Now he is back on screen in festival habitué Chung Mong-hong’s latest film, which makes Godspeed— a road movie, a buddy movie, an ultra-violent gangster adventure, a pitch-black comedy, and a Beckettian investigation into life’s absurdity, all rolled into one—a major cinematic event.

Mid-level gangster Ah Bao (Leon Dai) escapes from particularly nasty Thai drug dealers with a package of their product, looking to sell it to his foul-mouthed associate Brother Tou (Tou Chung-hua) in the south of Taiwan. He hires pudgy, passive petty auto thief Na Dow to make the delivery from Taipei. Hui plays Lao Xu, a hustling cabbie who basically forces Na into his car. On the long trip south, Lao Xu, charismatically garrulous and profane, discourses to Na on the meaning of life in a series of brilliantly comic monologues that Hui performs with characteristic virtuosity. Conspiracies amongst the gangsters send Na and Lao Xu, now kidnapped, on a series of further darkly comic adventures, which flip between Tarantino-esque Grand Guignol and the pair’s increasingly complicated rivalry-cum-partnership.

Godspeed demonstrates Chung’s cinematographic chops, with a typically dazzling sense of colour and provocative off-kilter compositions. It also shows off his ability to infuse the genre film with artful values—or perhaps it’s the other way around? What makes this masala slightly strange is the provocative discrepancy in tone between the horrifically spectacular violence of the crooks and the humanistic comedy of the buddies. It’s as if Chung can’t resolve the contradiction between these two genres: the film seems to insist that the existence and success of each needs the implicit support of the other, but what we get is something more like a mutual war of annihilation—which is fascinating nonetheless.