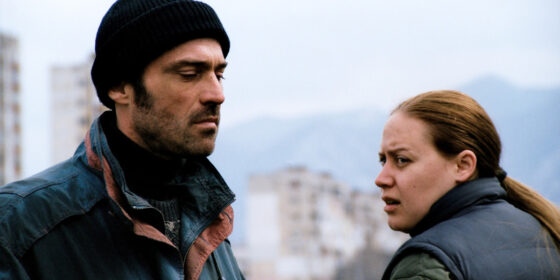 When is winning the Golden Leopard a hindrance and not a help? You can’t blame Godless for the Locarno jury’s decision to award it the main prize, nor for the fact that their decision links first-time director Ralitza Petrova to such an illustrious list of recent prizewinners that expectations are almost bound to be dashed. What you can blame Petrova for is making the sort of film that any jury would find it easy to rally around: a calculatedly harrowing slab of social-realist misery where everyone can agree that the important issues it deals with (identity fraud, corruption) are bad things.

The morose Gana (Irena Ivanova) works for a support service for the elderly in a small Bulgarian town, taking advantage of her access to their homes in order to steal their ID cards so that others can commit crimes in their name. The vision of Bulgaria Petrova crafts around this already grim story is utterly despairing: a truly godless place of crumbling concrete and shit-stained beds where gunshots ring out at night and those who wrong the powerful are left to rot in caves. Yet having the same message shouted at you again and again inevitably makes you question the motivation behind it, which is the cynical view that humanity can’t be redeemed and any cautious gestures to the contrary are ultimately pointless. And even if you subscribe to this sentiment, shades of black are still far more effective when paired with brighter colours, whether in terms of social commentary or just basic plot construction.

Petrova’s stern message might be more persuasive if it were couched in an equally rigorous form, yet piecemeal timidity rather than boldness is the order of the day here, a mix of handheld close-ups that play with focus, low-angle shots of buildings, broad vistas of the inevitably wintry landscape, and shots through rear windscreens, none of which are employed frequently or decisively enough to cohere into a potent formal system. Even the occasional more ostentatious gesture, like the choral music or frame-shattering final scene, still feel awfully polite when set against the stridency of the content. There’s nothing unusual about a debut feature suffering from formal hesitancy or thematic bluntness, and such flaws would likely be viewed more charitably in a different setting. But then that’s the downside of the spotlight: it also highlights every single imperfection.