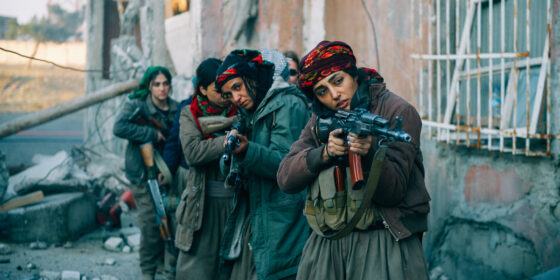 It’s often the case that a film that’s roundly lambasted in the hothouse environs of Cannes will look a little better under less rarified light. I wish I could say this is the case for the deeply well-intentioned but severely ham-fisted women-vs.-Daesh drama Girls of the Sun. For one thing, it’s a great story that ought to be told. (And it was told quite effectively, in the recent documentary Gulîstan, Land of Roses.) For another, it ought to be the stuff of old-fashioned, rah-rah movie triumphalism: after all, in an increasingly complex geopolitical landscape we don’t have too many unambiguous villains, and ISIL certainly fits the bill.

But in more ways than one, Girls of the Sun seems at war with itself. Husson is stodgy and risk-averse, so much so that she embeds a Western war journalist (Emmanuelle Bercot) as the white viewer’s point of entry, presuming an audience for whom all brown women look the same. But then she adopts a clunky narrative structure built around two extended flashbacks, both of which stop the war story’s momentum cold. It’s unclear whether this was meant to be a nod to the modernist cinema of memory, or if it’s just piss-poor exposition.

There was probably no way to make this a radical film, nor was there any reason to. It needs an old pro like Rachid Bouchareb at the helm; Husson, for the most part, seems to misjudge the assignment. She tries to approximate a young person’s idea of squareness, resulting in a film that feels like a hoary parody of wartime grit, a flood of clichés without a controlling vision. Put it this way: Girls of the Sun contains a scene in which a character actually says, “It’s quiet…too quiet.”