The Girl With All the Gifts (Colm McCarthy, UK) — Midnight Madness 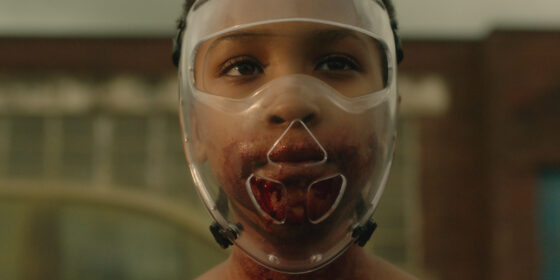 With its dystopian setting housing superhuman teens and zombies, The Girl With All the Gifts seems like a movie generated by a Young Adult Entertainment algorithm. And though it begins with the promise of possibly resembling Joseph Losey’s monster-child science-fiction horror classic These Are the Damned (1962), it unfortunately (and, given its glossy production, predictably) goes down the most prosaic path possible.

The set-up: the eponymous girl, Melanie (Sennia Nanua), belongs to a group of children infected with a living dead-like disease (though the script avoids the Z-word) yet who are able to function somewhat normally, beyond their collective hunger for human flesh. Both genetically and (as her interest in Greek mythology apparently attests) intellectually blessed, Melanie is also (of course) possibly an embodiment of hope for a better future, such that Dr. Caldwell (Glenn Close)—one of a trifecta of adult caretakers that also includes English teacher Justineau (Gemma Arterton), who takes a quick liking to her student’s creativity, and the quip-spewing soldier Sgt. Parks (Paddy Considine), who treats our heroine with extreme antipathy—is trying to extract a cure for the disease from her DNA.

An attack on the military base housing the carnivorous kiddies drives the story out into the deserted city streets, and the film seems to be opening up after a claustrophobic opening. But with its world-building limited to exposition about zombie-repellent gels and whatnot—not to mention its seemingly industry-mandated action scenes, which consist mostly of fired-off rounds of artillery captured with handheld cameras and rapid editing—The Girl With All the Gifts ultimately only reveals the limits of its imagination, a genetic deficiency that is the true Resident Evil of even festival-ratified genre fare.