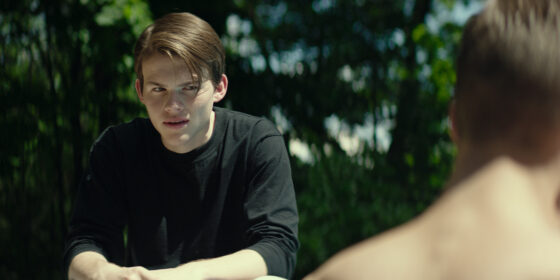 From its YA market-friendly nonsense title to its insistent poptimist score and tired elevator pitch—it’s about that One Moment Everything Changes for a sensitive, good-looking teen who has the whole world on his plate—Giant Little Ones has a lot of strikes against it. It’s a bit of a surprise, then, that Keith Behrman’s sophomore feature is as good as it is, as slickly edited and smooth-down-the-hatch as its Netflix youth-oriented cousins like For All the Boys I’ve Loved Before, but pleasantly rumpled in a way they never seem to be.

Josh Wiggins plays Franky, a swimmer who can’t seem to get it together with his girlfriend but has every intention of losing his virginity at his big birthday party, which suffering saint and recent divorcee Mom (Maria Bello) has graciously allowed to be hosted at their place while she looks the other way. The plan changes when Franky instead ends up hooking up with his best friend and fellow swim star Ballas (Darren Mann), who becomes cold and distant the morning after and only acknowledges their intimate moment to publicly accuse his friend of assaulting him. Things become complicated for our giant little ones, not least because Franky is still processing his own internalized homophobia with respect to a bullied teammate and, more pressingly, his own father (Kyle MacLachlan), who recently came out.

Fun Home this isn’t, but Behrman shows an editorial grasp over this potentially dodgy material, typically forgoing big speeches for furtive looks and intimate, halting conversations about the awkward stuff on everyone’s mind, most of which doesn’t have a name yet. He respects his characters enough to allow them to be petty, getting particularly flinty work out of Wiggins and MacLachlan in two-hander scenes that, in theory, couldn’t be more obviously phoned-in by a busy American actor in a Canadian production, inasmuch as they seem to always take place in Dad’s car, parked in front of the house. (“You should write a book,” Franky whines after his father tries to give him textbook coming-out advice, to which MacLachlan, all the Dougie Jones drained out of him, snaps back “You should read one.”)

That doesn’t excuse the way the film flirts with all manner of clichés from lesser teen movies about outcasts, from the sassy, non-binary queer friend improbably named Mouse (Niamh Wilson) to Franky’s burgeoning connection with Ballas’ traumatized sister Tasha (Taylor Hickson)—two freak peas in a pod. Even there, though, we see Behrman flexing some surprising dramatic muscles, resisting the urge to overdetermine this relationship and turn it into a position paper on Franky’s bisexuality. Instead, he tries to capture something more elusive and fluid, at the risk of doubling down on the swimming and sexuality metaphors that lie just barely under the surface.