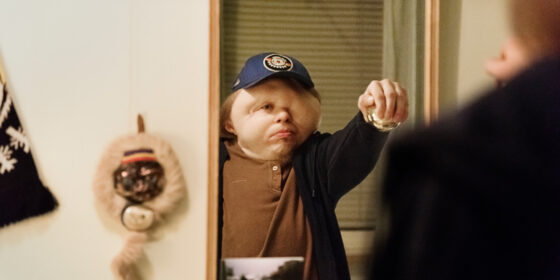 Johannes Nyholm has forged his own path, bending techniques to suit his personal vision in a number of astonishing music videos and short films, including the award-winning Las Palmas, which featured marionettes and his own baby daughter. An artisan in spirit, he has continuously experimented, mixing genres in a style both rough and playful in the service of a whimsical imagination. For Nyholm, cinema is what it originally was: magic. And the fresh excitement he’s nourished, by trusting and giving life to freaky ideas both narrative and visual, has been reliably infectious.

The first feature film completed by our Swedish poet handyman is, it goes without saying, pretty unique, though faithful to his signature mix of reality and absurdity, and to a certain childlike naïveté. The Giant is the touching story, both simple and grand, funny and sad, of an autistic man deformed by a large facial tumour (the best of Swedish make-up artists worked on actor Christian Andrén) who dreams of qualifying for the Nordic pétanque championships. But there are bumps along the way: his mother couldn’t cope, so why would dumb strangers? Fears and other intimate feelings and sensations surging from childhood inspire the filmmaker to mount a phantasmagoric show in which the small crippled man is a mighty giant, the colours of landscapes as vivid as artistic freedom allows, and Björn Olsson’s catchy tunes are blowing like the wind. The Giant makes pétanque exciting and features the best friend you could ever dream of. It’s a leap forward for Nyholm in terms of scope and emotional impact, but it continues to exist in his unique universe, one in which strangeness is what’s most appealing. He’s right in that, of course.