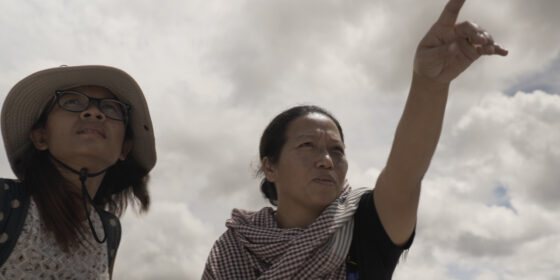 Apparently they aren’t watching much Errol Morris over at Paul Allen’s Vulcan (the woke producers here), or else The Thin Blue Line has become neglected in documentary programs, lest a telejournalistic “exposé” such as Ghost Fleet, unwittingly indulging its own spurious methodology while attempting to uncover another, be mistaken as meta. Fulminating against the human-trafficking crisis that takes place at sea aboard rogue fishing vessels originating in Thailand, Ghost Fleet ushers in the putative emergency by way of dubious expository dramatizations, along with drone establishing shots, lachrymose facial close-ups, and unctuous slow-motion sequences. As ever, it’s a question of whether a film’s formal grammar can be scaled to ethically accommodate its subject, which Ghost Fleet goes begging.

Serving humanitarian issues as dramatic chum that can be easily digested or virtuously metabolized is one of nonfiction’s increasing box-office appeals, and acts as a popular currency in cinema’s surviving exhibition channels, the festival circuit or on-demand. The call-to-action genre appears to be inexhaustible, and as such speaks to the depravity and avarice of our time, but does it make for enduring cinema? Ghost Fleet is a curious case, possessed of an actionable “topic” (which co-director Service previously broached as an investigative reporter) about the spectral conditions of captive migrant labour in servitude to a rapacious Thai seafood industry, deployed further ashore as supply (and legality) is diminished. But can the film cut open our conscience beyond what we’ve already gleaned from HRW reports and a host of related YouTube clips?

To this end, the film attempts to refract the plight of enslaved workers through the perspective of activist Patima Thungprachayaku, who, along with her modest task force, forays by boat to remote ports in Indonesia to rescue and repatriate native Thai, Cambodian, Laotian, and Burmese workers. The specific labour conditions of these captives are scarcely elaborated, possibly owing to the plausible dearth of coverage of such an illicit industry, which renders the film’s choice of a dramatic arc opportunistic rather than observational. Employing stylized visuals scored to prisoners’ testimonies of abuse has an unintended distancing effect. More worryingly, it is the prompting of such material as an illustrative function that tips the film towards something simulative, and not nonfiction. The anachronistic delivery lends to syntactic confusion: the determination of subjects as “enslaved” upon introduction (via intertitles) performs an imposition rather than a disclosure, offering them little agency as to how their histories are represented and revealed. Meanwhile the camera eddies airborne above the ghost boats, no less anonymous for it.

The film returns home from its self-styled mission in treacherous waters with a freed slave to show for its efforts, who is treated to an emotional homecoming and political ministrations back in Bangkok. As one among thousands whom Khun Patima has helped liberate, shouldn’t they together warrant more than the film’s conclusive supermarket-to-table montage that merely implicates us all in the global food chain? Hard to harp on a film of such sincerely good intentions, but a more rigorous approach could do the issue more justice.