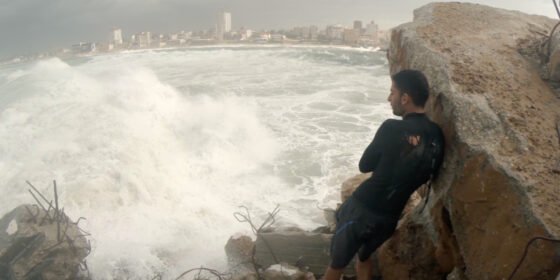 Whether it’s admirable wish-fulfillment or just plain dishonest, Mickey Yamine and Phillip Gnadt’s Gaza Surf Club is a “feel-good” documentary that wants to be—and is about being—distracted from injustice. Focusing on the bourgeoning surfing culture in the Gaza Strip, the film follows three interconnected individuals: a female adolescent who can’t swim because it’s deemed a “sin” for women; a middle-aged man who fathered the surfing community; and Ibrahim, a twentysomething who aspires to open a surf shop in Palestine. This trio is united by the sea, which is a prime source of income, a reminder of beauty in a battered region, and the cornerstone of this emergent youth culture.

Surfing acts a springboard into broader topics like geopolitics, sexism, and the difficult day-to-day existence for those inside the occupied territory. Or, at least, this is how the film functions in theory. What Gaza Surf Club lacks in political nuance or exposition, it fills in with uninspired manipulation. Gnadt and Yamine make their subjects contraptions, fitted to accessible archetypes, surgically perfected to appeal to Western viewers and thereby contradicting the very thing the film sets out to do: represent a specific, resilient and developing Palestinian culture. By attempting to empower a marginalized people and celebrate surfing as a quiet revolt, the film settles for uplift over ambiguity, and simplified narratives over a multifaceted portrayal of the ongoing conflict. Gaza Surf Club is Disney masquerading as “documentary.”