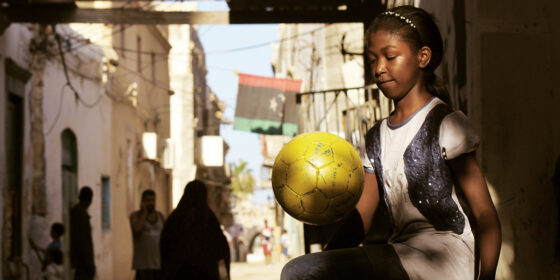 Taking place over the four long years after the Arab Spring, Naziha Arebi’s documentary Freedom Fields tracks the changes, and the lack thereof, after revolutionary fervour calms down. The film focuses on a group of young women attempting to become Libya’s first all-female soccer team and who, despite their best intentions, end up being at the intersection of the old and new worlds.

Supported by their family and more moderate individuals, the women deal with multiple roadblocks, at times literal ones. A women’s soccer team had not existed in Libya before the revolution, and the more conservative elements of Libyan society remained in place afterwards. Though the focus of Arebi’s film is predominantly intimate profiles of the players, the world around them is always within reach, primarily mediated through technology. They watch condemnations from conservative religious leaders on their computers and talk about the comments on Facebook; the insurgency that’s happening around them is always on television screens, and sometimes even on nearby streets. These women know the difference between fireworks and gunfire very well. Even those few figures of authority who do support them—such as the leaders of the soccer federation and their coaches—are often blocking their progress, concerned about their safety. The pressure and their frustrations are well-documented, and Arebi uses each instance to draw parallels to the role of women in this changing Libyan society. That a sports team is an extension of a national identity isn’t new territory, and these women have to deal with a national identity in flux.

The broader appeal of Freedom Fields is encapsulated in the opening scene, wherein a few of the women drive around at night, laughing and eating ice cream. It’s kinetic, driven by the movement of the car, but also intimate: the pleasure of a hot summer night with friends. It is clear that Arebi’s film had one set of intentions, ideally documenting the success and attention that the soccer team should have garnered over the years. But as each of the women profiled must deal with the burden of meaning imposed on them, both as soccer players and the subjects of a documentary, they all break free. Rather than a feel-good finale of team success, these women realize the power that comes from their work as individuals. Whether as doctors or starting their own NGOs to support women, they all in one way or another leave soccer behind, finding work beyond the scope of Arebi’s film.