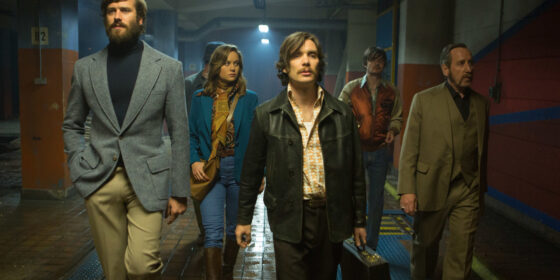 A canny genre filmmaker with a Situationist’s knack for how people’s surroundings sculpt their blinkered worldview, Ben Wheatley is wise to make Free Fire, his first film set in the US, a crime caper with big-mouthed braggarts shooting off their guns in a confined space just large enough to let them strut. Where the open plains triggered hysteria in A Field in England (2013) and the English countryside bred contempt for a married couple’s fellow men in Sightseers (2012), in Free Fire a cavernous warehouse in late-’70s Boston becomes an auditorium (and gun range) for a multinational crew of impotent swinging dicks played by a who’s who of UK stars, plus Sharlto Copley (at his best, for whatever that’s worth), a turtlenecked and wry Armie Hammer, and freshly minted Oscar winner Brie Larson as the lone cool-headed woman spearheading an arms deal turned double cross.

Wheatley eases back into the fleet pacing of his early films, but there’s a sense here, also bred by the pulpy dialogue and likeable but not especially well-realized stock characters, that he’s taking modest risks for modest rewards. The stakes are about as low, whatever the occasional (perhaps ironic) chords of lyrical guitar say to the contrary: everyone gets shot but virtually no one seems to die, the blood tattoos etched in the characters’ leathers, denims, and tweeds becoming our most legible sign for their pain level and odds for survival at any given moment.

Though Wheatley and partner Amy Jump’s script is smart to send up American gun culture and masculine braggadocio without being too cheeky about it—most of the couple dozen shootings come about due to misunderstandings and bad attitudes—there isn’t much more to chew on beyond the rich setting, which makes the rare bum notes like Larson’s overused side-eye especially obvious. But none of that takes away from either the film’s craftsmanship or its geniality. Wheatley is as dryly funny as he is comfortable at making immaculately framed urban gothic paintings out of the dirt and debris of a ruined warehouse.