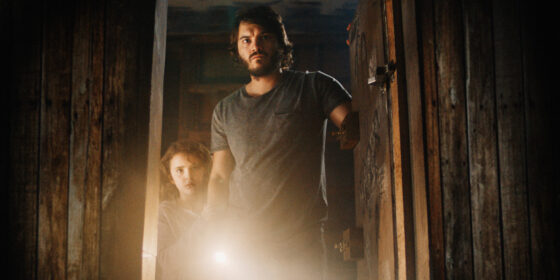 Too grim for a straight-up YA audience and too goofy to be taken too seriously, Zach Lipovsky and Adam Stein’s Freaks at leads owns its curious at-oddsness: it’s a weird, scrappy, palpably Canadian mutant that’s actually more likeable for not quite passing as mainstream fare. That earnest-misfit ethos begins with its seven-year-old heroine, Chloe (an excellent, well-directed Lexy Kolker), whose vaguely defined psychic powers are disencouraged by Dad (or is he?) Emile Hirsch. The pair’s hermetic suburban retreat from an outside world that Chloe’s father insists is fatally dangerous generates just enough what’s-really-going-on-here ambiguity to hint at a disconcerting, Room-like scenario before the script thankfully veers hard into Marvel territory, complete with Stan Lee-style sociology about our collective fear and loathing of what good old Professor X might term “gifted youngsters.”

So yes, the title is ironic, and also a metaphor: Who, we might ask, are the real freaks in Trump’s America (played here by Vancouver)? Fortunately, Freaks is more interested in bloody headshots than bleeding hearts, and as Chloe’s naïvete about her abilities gives way to a righteous (and self-consciously De Palmaesque) fury, the film amasses a body count that offsets both the potential innocuousness of its coming-of-age set-up and the broadness of its allegory. I don’t know if Lipovsky and Stein (who landed the upcoming live-action Kim Possible film) are budding genre whizzes or simply competent pros, but their co-directing debut looks, sounds, and moves (via some very nice editing by Sabrina Pitre) like a credible entertainment. I’m reminded—fondly—of Josh Trank’s Chronicle, a more accomplished and visionary (and also more mean-spirited) work which augured big things for its director that, for well-publicized reasons, did not come to pass. Here’s hoping things go better for these guys.