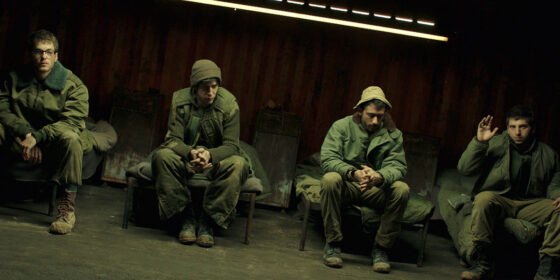 Not every director comes to filmmaking early in life, but those arriving at it later usually kick in with a vengeance. Samuel Maoz was only a few years shy of 50 when he was awarded the Golden Lion in Venice in 2009 for his debut feature Lebanon, a dramatized version of the personal nightmares he experienced during the 1982 Lebanese War, set almost entirely inside of a cramped battle tank. Now, eight years later, he is back with his follow-up, Foxtrot, which is no less impressive, dark, or daring than the first film, even if the title might initially suggest a milder, more upbeat affair.

Stepping out of the confines of a single interior setting into a much larger and more complex visual landscape, Maoz this time chooses to set himself (and his audience) limits that are determined by narrative approach rather than cinematic space, as he tells a harrowing family tragedy in three efficient (if fragmented) acts. First we meet the parents, Michael and Daphna Feldman (Lior Ashkenazi and Sarah Adler), in their chic Tel Aviv apartment as they are being informed of the death of their son, Jonathan—who, as the story unfolds, turns out to not be deceased, but rather a casualty of inept military administration. As a result, the middle part of the film shows the apparently departed young man stuck with his mates in the muddy wilderness of an isolated outpost somewhere in the middle of nowhere, alive and kicking and going about the usual business of boring routine tasks until a string of odd events, group paranoia, and unlucky circumstances ultimately lead to disaster and demise. The final act is best kept under wraps, but in the end, it all comes down to where it started: a dance with reality and all that goes with it, past, present, and imagination.

If Maoz doesn’t always manage to fully keep up with the fierce rhythm of his own storytelling, he makes up for it with the sheer virtuosity and boldness that brings his film alive. And, more importantly perhaps, Foxtrot never steps into the second-feature trap, but proves once more that the Lebanon director is a force to be reckoned with, at any age.