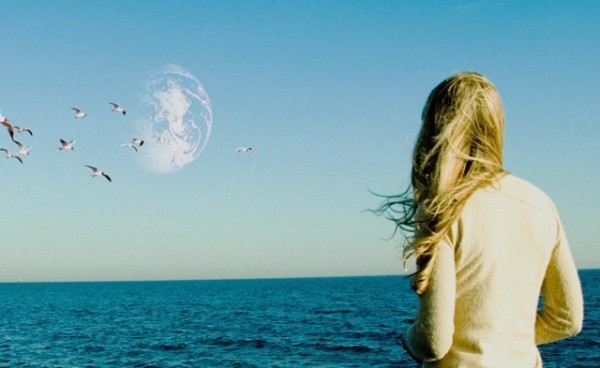 The idea of parallel worlds is familiar to anyone even casually acquainted with such science-fiction perennials as Star Trek and The Twilight Zone or other pop culture staples. (Comic books especially have minted the conceit for all it’s worth as a means to shake up their heroes’ histories, with both Marvel and DC devoting entire imprints to it with What If. . . ? and Elseworlds, respectively.) Like all such scenarios, Mike Cahill’s self-explanatorily titled Another Earth proceeds from a fairly straightforward “what if?” proposition, but like its one real special effect—that titular globe dangling imposingly in the sky, day and night—both the origins and the implications of its central conceit hang in the background. Whether or not the parallel Earth of Another Earth functions any differently—like the mirror-image Earth of Robert Parrish’s Journey to the Far Side of the Sun (1969)—isn’t addressed until the film’s final moments, and even then it doesn’t really matter. This is incidental science-fiction in the grand tradition of Solaris (1972), where all the hushed talk about neutrinos and other techie-jargon is entirely beside the point and stargazing speculation leads inversely to the microcosmic mysteries of the humans looking heavenwards.

Accordingly, and amusingly, Another Earth undercuts the awe of its cosmic discovery by having the news of this suddenly revealed other Earth (which had been tucked away behind the sun and only now slunk into view of the naked eye) delivered not by stuffed-shirt SETI scientists or self-serious newscasters claiming the day for history, but by an obnoxious Top 40 radio jock identifying himself as “your boy Flava.” Opening with a series of fuzzy, handheld high-school party scenes that betray the film’s Sundance provenance, Another Earth soon settles on seventeen-year-old Rhoda (co-writer/co-producer Brit Marling), a high school science whiz celebrating early acceptance to MIT, who is driving home when our boy Flava hips her to the news of the newfound mirror planet. Half-drunk, half-distracted, her car crosses lanes, colliding with a luxury SUV carrying a family of three. Cahill handily condenses the resulting fallout (one of those considerations of the micro-budget that ends up benefiting structure and plotting) by a closed-circuit shot of Rhoda stewing in a jail cell, a “Four Years Later” title card, and then a clipped sequence of our heroine getting picked up by her family and stripping her bedroom down to a mattress on the floor and a magazine clipping of the cosmos tacked to her wall.

After taking a job as a high school janitor (which nicely echoes her recent prison stint in its monotonous repetition and penitentiary-style jumpsuit), Rhoda ambles home from work one night and returns to the site of the accident, where she finds John (William Mapother), the other survivor of the crash, holding a brief vigil at the spot where his wife and son were killed. Wracked by guilt, Rhoda tracks him down to a dilapidated house in the Connecticut countryside. While arriving at his door with every intention to apologize and absolve herself, Rhoda instead cooks up a cover story about being a cleaner from a service offering a free trial. The bedraggled John, not knowing who she is (Rhoda’s name was never released because she was a minor when the accident happened, and John had asked his brother to retain the files out of fear for what he might do to the perpetrator), lets her in after some pressing, and Rhoda sets about tidying up the life she left in ruins. A sense of shared personal growth and, of course, romance, duly follows.

This cutesy convention of someone helping the unknowing victim of a past misdeed—a dependable, audience-privileging way to ramp up dramatic tension—has been grist for the mills of filmmakers as varied as Denis Villeneuve (Maelström, 2000), Marc Evans (Snow Cake, 2006), Deborah Chow (The High Cost of Living, 2010), Andrea Arnold (Red Road, 2006) and, most notably, the Dardennes (Le fils, 2002). But while this narrative framework is buckling some from overuse, and is particularly endemic to the sort of indie drama that Another Earth would be without its sci-fi twist, Cahill and Marling make it serve their humble yet affecting central point. In the richly suggestive drama of Marling’s tentative gestures—note the way her hand hovers over a doorknob as she mulls escaping from the situation in which she’s put herself—the question of “what if there was another Earth?” both simplifies and deepens into the more plaintive question of “what if things were different?” It’s not just the mirror planet, but the cosmos itself that is the MacGuffin here. Another Earth ultimately posits that these potential alternaverses, and the sprawling arrays of possibility that they promise, exist infinitely, in every daily moment; as in Borges, the forks of possibility’s labyrinth exist as moments in time.

In the film’s opening party scene, Rhoda friskily says that she is not yet ready to “bite into the apple of cynicism.” It may seem like a bit of a wink-nudge, calculated to check our suspicious eye-rolls as Another Earth tracks too closely to the saccharine (as when Rhoda’s blind co-worker pours bleach in his ears to further dull his senses to the external world), the obvious (as when John quotes Plato’s cave analogy, putting a bit to fine a point on things), or the insufferably indie-twee (at one point John performs a solo singing-saw set for Rhoda which plays as the kind of thing better suited to Juno [2007]). But it’s to Cahill and Marling’s credit that their film keenly works to haul us out of these orbits of sneering and skepticism. When Another Earth arrives at its final shot—an image more evocative than nine Inceptions nested inside one another—Cahill and Marling have valiantly beat back the gathering tides of fatalism that it would have been all too easy to surrender to.