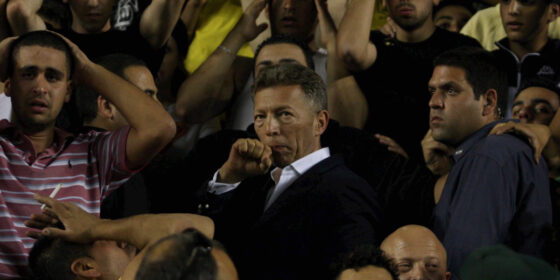 They call themselves La Familia, and the mob connotations don’t end there for the yellow-and-black-clad uber-fans who reliably fill the stands during each game of Beitar Jerusalem F.C. But in exchange for their loyalty, they exact a high price. In Forever Pure, Maya Zinshtein follows the controversial 2012 season, when Beitar recruited two Chechen players, the first Muslim footballers the decades-old team had ever signed. The racist and Islamophobic outcry from the right-leaning L.F. was swift, and their constant verbal abuse and game-day boycotts obliterated the team’s previous winning streak.

Zinshtein embeds herself with the players during this tumultuous season, getting a fly-on-the-wall look at the team’s morale, the political scheming of Beitar owner Arcadi Gaydamak, the culture shock experienced by Chechens Zaur Sadayev and Dzhabrail Kadiyev, and the growing nationalistic extremism of the Israeli fans. That it is a female eye peering into the dark side of male-dominated sports fandom is especially compelling, as it astutely appreciates how quickly macho posturing can into heinous bullying.

It’s a scarily familiar scene, given the upcoming US election, as La Familia chant increasingly racist slurs as protest during games. That they’ve made moves to transition their collective power from the sports arena into the political arena is a potent harbinger of what a hate-mongering mob mentality can accomplish.