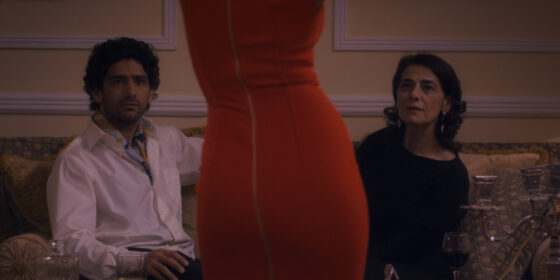 The 2014 Palme d’Or winner Dheepan was torn between being a traditional art-house film about lower-class immigrants and director Jacque Audiard’s genre fixations; the film is boilerplate social realism until it ends with disorienting, internalized violence that recalls the climax of Taxi Driver (1976). Something similar happens in Raja Amari’s Foreign Body. Samia (Sarra Hannachi) arrives illegally in France from Tunisia after her ship wrecks along the coast and kills everyone else on board. With nowhere else to go, she seeks out Imed (Salim Kechiouche), the friend and enabler of her locked-up jihadist brother. Sensing that her arrangements are less than ideal—she ostensibly becomes Imed and his roommates’ maid—Samia finds a job with a wealthy French widow, Leila (Hiam Abbass), for whom she cleans and cooks in exchange for shelter and a French identity. What happens next is a kind of risky and risqué scenario with details steeped in Sirk and Fassbinder: Samia, originally interested in Imed, falls for Leila, who in turn has the hots for both Imed and Samia. Sloppy and spicy, sordid and sincere, Foreign Body is, like its protagonist’s identity, split in two: it deviates from a realist portrait in favor of a cross between Ali: Fear Eats the Soul (1974) and Carol (2015). Though the performances acclimatize to the new narrative environment, it’s a shame that the form doesn’t fully embrace the script’s melodramatic turns. What we have instead is a film that exists in limbo, a bold statement whimpered by a quivering voice.