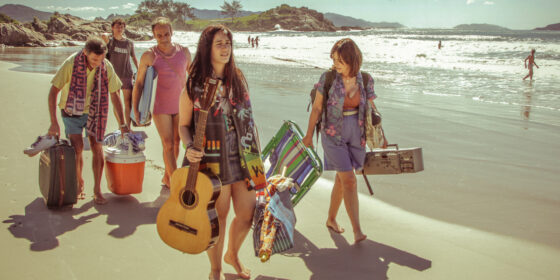 Since her debut feature El juego de la silla (2002), Argentine actor-turned-filmmaker Ana Katz has defined a personal style of comedy: a peculiar derivative of the costumbrismo, a cinematic form that she further elaborated in A Wandering Bride (2007), and which reached its limit within the confines of the mainstream in The Marziano Family (2011). With Florianópolis Dream, which won the Special Jury Prize at Karlovy Vary, Katz continues to blur the limits between the universe of what’s usual and expected—themes, situations, characters on the brink of some sort of crisis—and a narrative form that gently twists the clichés of what the audience might find familiar. The film is set in the ’90s, a time when Argentina was ruled by Menem’s government and the convertibilidad (1 peso = 1 US dollar) allowed the middle class to travel to far and exotic places without much financial stress. It’s not casual that Katz has chosen Florianópolis as the destiny for her fictional family in the film: that coastal town in southern Brazil is still a symbol of that bygone era.

Mom (Mercedes Morán), Dad (Gustavo Garzón), and their two almost adult kids reach the beach and almost immediately something’s made clear, although nobody says it explicitly: it’s probably their last holiday together. There will be romance with locals for both and for their son and daughter, even allowing some touches of the traditional coming-of-age narrative arch, but Florianópolis Dream is at its best when it describes the (sometimes hilarious) interaction of the four members of the family, showing the filmmaker’s very acute ear for writing casual, quotidian dialogues even as she effectively conveys a sense of melancholy behind the humorous fortunes and misfortunes of her characters. In what can only be described as The Year of Morán (she can be seen in María Alché’s Submerged Family, Juan Vera’s romantic comedy An Unexpected Love, and in a small but very powerful role in Luis Ortega’s El Angel), Katz’s lead delivers a fine and subtle exploration of middle-aged femininity.