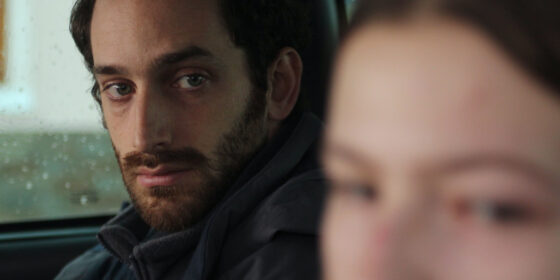 “The Romanian Nightcrawler” is probably not the most accurate description of Adrian Sitaru’s new film, but it captures something of its commitment to attacking present-tense fifth-estate ethics. The media critique is a sub-genre that’s historically been the sole provenance of American filmmakers, but The Fixer makes a valid claim on the territory. In lieu of Jake Gyllenhaal’s bug-eyed freelance videographer-of-the-damned, our hero is Romanian-born, Paris-based up-and-comer Radu (Tudor Istodor), whose multilingual gifts make him a suggestive avatar for post-EU Europe, and as such, especially valuable to his bosses for stories involving immigrants. Learning of a potentially scandalous story involving underage sex workers being shuffled clandestinely between borders, Radu seizes opportunistically on the hot tip, in effect transforming his network tryout into a kind of trial by fire. While it’s convenient (and lazy) to tie The Fixer to the films of the Romanian New Wave, Sitaru doesn’t display much in common formally or structurally with Puiu, Poromboiu et al. Aside from one (very well-acted) long-take sequence in which Radu and his colleagues tentatively invade a source’s cramped apartment, the film is shot and edited with a slick, pedestrian clarity. What’s good here is the way that Istodor evinces an internal struggle without turning the character into the sort of anguished cipher that usually figures in this sort of moral tale. His fine performance goes a long way in keeping The Fixer engaging.