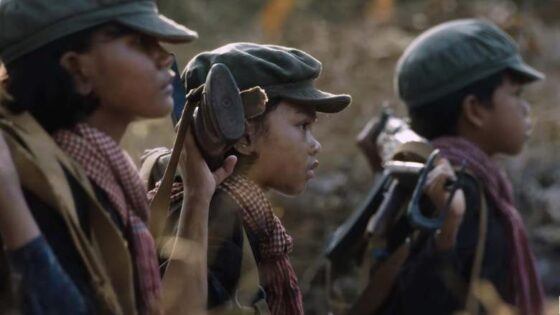 Can there be any doubt, within the simplified moral terms of cinema as conveniently conscionable entertainment, that Angelina Jolie’s Cambodian project constitutes an act of courage? Any doubts are flagged as cynicism, any detraction deemed insensitive. And yet, for a survival story of such magnitude as Loung Ung’s (from whose memoir Jolie is working), to leave one dazed but ultimately unmoved may be attributable less to one’s own dearth of compassion than the cinematic means by which such empathic routes are made available.
All the necessary horrors are here: five-year-old Loung, one of seven children, flees with her family from Phnom Penh when the Khmer Rouge begins its sweeping campaign of terror. Hiding their identity (the father is a government official), the family travels from village to village, stripped of their possessions and ultimately their dignity as they are forced to work in labour camps. They separate in order to survive, and the precocious Loung is purposed as a child soldier in training.

Jolie and DP Anthony Dod Mantle translate this “harrowing journey of survival” with fidelity to Loung’s memoir, and the participation of Rithy Panh (The Missing Picture) lends credibility against any hazards that such adaptations, in the act of commercialization, inevitably entail. Still, enigmas of translation remain: how to render deeply personal and historically sensitive details without relying on conventional cinematic tropes? How to make adversity and suffering visible without fetishizing or reducing its specific etiology? Can an instructive representation be made between those who are forced to bear pain and those who wilfully inflict it? In other words, the crisis of representation looms conspicuously in First They Killed My Father, because an expository approach seems like a foregone methodology.

The film responds to such endemic formal conundrums (which do have moral implications) with something less courageous: namely, the deployment of a restless Steadicam that weaves and eddies incessantly around its woeful protagonist as if intimating her innocence amid degradation. Nothing is intrinsically wrong with that, given the state of flux that the family endures, but the cut/pirouette/move along approach creates a sumptuous cinematic space in which, ironically, all manner of abjection might be contained and expressed. The specificity, for instance, of being reduced to eating insects is registered, but it becomes a merely descriptive point of exposition along the continuum of suffering.
Too emotionally engrossed in the dramatic fate of this child to notice the camerawork? It’s conceivable too that an excess of production precludes one from feeling more intimately what this child is experiencing, in the absence of the film’s grand scaffolding. We know that a reunion is imminent, that children will once again play—and that these things did actually happen in recent memory. But having been privy to one woman’s personal history yoked to the fate of a country, shouldn’t we be utterly gutted?