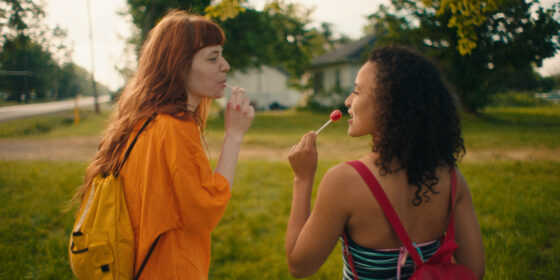 It’s a town full of losers and they’re pulling out of there to win: that’s the premise of Jasmin Mozzafari’s Firecrackers, which expands the director’s 2013 short of the same name into a conspicuously stylish, intermittently impressive debut that feels very much of the moment in young Canadian cinema, like a faster, flashier Ontarian cousin to Ashley McKenzie’s Werewolf. There’s maybe a bit too much foul-mouthed posturing at the outset by stars Michaela Kurimsy and Karena Evans to establish their characters’ teenage-wasteoid defiance as they plan (more like wish) for an Escape to New York; a little bit of such stuff goes a long way (and too much means you’re watching American Honey, which the filmmakers surely have). But the grim, circumscribed outlines of Chantal (Kurimsky) and Lou’s (Evans) lives in Doug Ford country are nevertheless sketched with enough skill and conviction that the film pushes beyond an actors’ exercise into something more substantive.

Mozzafari and her superb cinematographer Catherine Lutes keep flooding their mobile, off-centre frames with colour and movement, at once inscribing and defamiliarizing both their semi-impoverished environments and the people fixed within them. The actresses are each compelling camera subjects, with Evans (better known as the director of Drake’s recent promo clips for “God’s Plan” and “In My Feelings”) underplaying Chantal’s victimization and shame to better spark best-friend-avenger Kurimsky’s hot, incandescent rage, which in turn gives the film its narrative and ideological engine. The script’s roundelay of confrontations between friends, parents, lovers, and exes builds to one of the blunter (but no less powerful for it) visual metaphors I’ve seen in a while, a vicious distillation of the power dynamics of patriarchy that’s neither easily parsed nor forgotten.