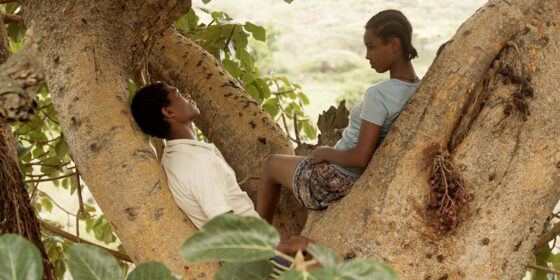 Sometimes debut films are actually frustrating because of the promise they show: I find myself wishing I could skip ahead to the next film, which is almost certain to be richer and more fully realized. But anyone who has ever worked in the creative arts in any capacity knows that this isn’t how it goes. You have to plow through the early years, honing your craft and learning from all the mistakes along the way.

There is a great deal to admire about Aäläm-Wärqe Davidian’s first film. Above all, she is successful at generating an all-enveloping atmosphere of panic and confusion as she recreates 1989 Addis Ababa and the Ethiopian Civil War, when young boys were scooped up off the streets and conscripted (read: kidnapped) into the army of the country’s Communist Derg junta. Fig Tree shows boys vanishing from schools, hiding at home and in the forest to avoid capture, while girls are expected to continue life as though everything is normal.

Where the film falters is in articulating its subtler shades of meaning. We are witnessing these events through the eyes of Mina (Betalehem Asmamawe), a young Jewish girl whose mother has fled to Israel some time ago, leaving her, her brother, and grandmother behind. It seems that much of the broader contextual meaning of Fig Tree hinges on Mina’s Jewishness, but certain key elements were vague, at least to me. It was not clear, for instance, that Mina’s boyfriend (Yohanes Muse) was Christian, nor was it apparent whether there was justification for Mina’s suspicions that the Israeli consulate worker, who was trying to secure the family’s exit from the country, was crooked.

It is no crime for a film to be more adept at conveying mood than plot. However, there is a definite sense that Fig Tree wants to impart specific information about the plight of its characters and the real historical subjects they represent. So for her next film, Davidian has a choice to make: she could work to improve the basic mechanics of narrative communication, or she can capitalize on her strengths and explore films that directly transmit the affect of traumatic historical moments through a kind of sensory convection. Obviously, I hope she chooses the latter. Lots of films can tell us what happened when, but it’s up to true artists to show us how to feel.