Festivals | Rome, Around the World 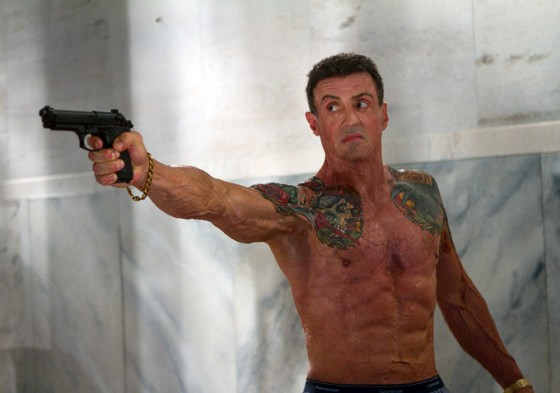 Bullet to the Head

Given the disastrous and shapeless state that has characterized the Rome Film Festival since its unfortunate inception, it was not hard for Marco Mueller and his team to come up this year with something less vapid than what preceded. At the same time it was unthinkable that the festival’s identity and artistic profile could be reinvented overnight—only the old fogeys of the Italian press could expect such a thing. So that the final result would be somewhat intermediate was an almost foregone conclusion.

Defined by the artistic director—a man equally admired and loathed by the audiovisual continent he so artfully navigates—as a “pluralistic, contradictory, and porous” event, the festival was a pathetic show of mundane provincialism of the kind that only Italians can come up with. That the historic Cinecittá stories—opened under the auspices of Mussolini and closed under the presidency of another fascist, Rome mayor Gianni Alemanno—are to be turned into a luxury theme park perfectly sums up the kind of cultural politics governing the country. Outside of its putrescent institutions, the city is nonetheless teeming with experiments in cultural resistance: the oldest theatre in town has been occupied for more than a year and autonomously run by temp art workers. Cinemas no longer in use are squatted and programmed by young, mostly unemployed film lovers, while the average age at the festival’s press screenings is around 60… Completely unreceptive to the plummeting temperature of the country’s cultural bodies, the festival sailed through its grotesque display of cheap stars, embarrassing local talents, and old farts as if all was fine. It is not, not at all.

What does it say about Rome that the festival’s aesthetic peak was probably reached by Sylvester Stallone’s performance in Walter Hill’s Bullet to the Head? Stallone’s shiny muscles threw the local press into ecstasy. They even asked him during the press conference, “How do you keep so fit at your age?”—and that was one of the most interesting questions. Bullet to the Head is indeed a fine piece of ironic buddy-moviemaking, and Stallone is at his best since his pro-Afghan jihad commitment in Rambo III (1988). In a post-Katrina and post-legal New Orleans, cops and criminals join forces to defend their own interests and take out some personal enemies, thankfully not taking the whole thing too seriously. That the monolithic facial expressions of Mr. Stallone could still generate laughter was perhaps the festival’s most unexpected revelation.

In the rather objectionable main competition, the embarrassing indigenous features Ali Blue Eyes by Claudio Giovannesi and E la chiamano estate by Paolo Franchi received multiple prizes. The former revolves around a young Italo-Egyptian man stereotypically struggling with his two clashing cultural identities. (Commonplaces abound to ludicrous extents.) The latter is the story of a naked woman unsuccessfully trying to get her partner’s penis up. Unsurprisingly, Franchi’s film did not go down well with the (flaccid) Italian pornocracy. There were two standouts in the competition, however. A solid and muscular entry, Johnnie To’s Drug War is the first film the Hong Kong maestro shot in mainland China, and it’s as familiar as it is forceful. Handcrafted with rare mastery, the final gun-down takes place in a few square metres of pure cinema: devoid of special effects, the scene is a ballet of crashing cars, hissing bullets, and falling bodies. As the certainties parting the law from criminality capitulate, everyone runs for cover until the very last round of bullets is fired. Both good and evil perish in Drug War, forcing the spectator to look beyond them. Mai Morire by Enrique Rivero impressed for its self-contained wonder, revolving around immaculate photography and basically nothing else. A middle-aged Mexican woman returns to her native village to tend to a dying relative, yet the emotive charge of the film never enters their relationship but is confined to an absorbingly lensed landscape. Despite the usual lack of narrative—let alone plot—Rivero’s film somehow places at a distance the draining canons of observational cinema to reclaim an emphatic aestheticism that suffices in and of itself.

Italian narrative cinema in, outside, and below the competition stood out for its remarkable uselessness, with the exception of one now veteran filmmaker (though he is curiously unknown abroad), Pappi Corsicato. Combining the plastic exuberance of Russ Meyer and the campier drifts of Almodóvar, this Neapolitan loose cannon has been making self-consciously trivial films for the past 20 years. Aping and exasperating the bloodcurdling superficiality that is taking possession of Italian screens and culture, Corsicato holds up a mocking mirror to the monstrosity of his country. Il volto di un’altra tells the story of a TV starlet hosting a plastic surgery reality show who, after an accident, pretends to be disfigured so as to collect the insurance prize. With overblown characters, overblown plot twists, and overblown breasts, this modern fairy tale of horrific if colourful proportions is perhaps the closest one can get to Italian hyperrealism. That the average reaction to his movie from the liberal elite to the arty film student went along the lines of “How stupid that film was!” says it all. The dementia that Corsicato’s films poke fun at is perhaps too deeply ingrained to be recognized as such, a bittersweet parody narrating a tragedy.

Beacons of marginal obstinacy, a last-ditch resistance against the ingratiating rule of Italian mediocrity came in the documentary form. Dell’arte della guerra (On the Art of War) by Luca Bellino and Silvia Luzi, Interdizione perpetua (Perpetual Interdiction) by Gaetano Di Vaio, and L’uomo con il megafono (The Man With the Megaphone) by Michelangelo Severgnini all deal with residual forms of antagonism. Against the willing slavery of immaterial labour, the three documentaries register the last (?) rattles of militant insubordination. Profoundly melancholic yet not defeatist, all three films restate with courage the necessity of maintaining dignity even in the face of post-industrial debacles. Far removed from the daily (un)awareness of reality, the films were equally ignored by the press and public.

A gorgeously designed ghetto for the educated middle classes, the MAXXI museum of modern art housed the festival’s most interesting section, Cinema XXI Secolo. A section devoted to the exploratory ventures of 21st-century cinema, its highlights included Tricked, a crowd-scripted medium-length feature directed by Paul Verhoeven for Dutch television. Halfway between soap opera and comedy of errors, Tricked is an amusing and unpretentious diversion following the extramarital affairs of a wealthy businessman. As lies, cover-ups, and hilarious fuck-ups accumulate one on on top of one another, the man finds himself unable to manage both his private life and his company, whose future is threatened by blackmail. Plot twists follow each other rapid fire, without ever clogging up the agile and extremely entertaining pace of the film—it’s full of surprises till the very last shot.

However, it was the mere presence of the wildest visionary (outside) of cinema (not) working today, Julio Bressane, that made up for a rather dull festival experience. The Brazilian director presented his latest gem, O batuque dos astros (The Drumming Beat of Stars), a documentary on Portuguese writer Fernando Pessoa that refuses to document his life and instead shares fragments of his passion and passageways to his imagination. Bressane confirms his intransigent vision, far removed from elocutionary anxieties of all stripes, held at ransom by the irrational force of images. His images are devoid of any didactic lessons; they escape the hypocrisy of thesis and the ostentation of art cinema. In this film he declares his love for Pessoa and then makes the spectator feel it, in all its pre-linguistic impetus. Bressane is so independent that for most of his anti-career he has been virtually clandestine, resisting the vile hostility of the industry beyond any limit and therefore always setting new ones. Resolutely and innocently opposed to the criminal formality of “good taste,” Bressane involuntarily demonstrates that existence is resistance, both in and outside cinema. Every one of his films is a probe into the drain of cinema irrationally sifting through its Western rationalism to discover a repressed ab-originality.

O batuque dos astros is an open wound into a carnal literary passion; it is without a message, as it is an experiment in freedom, aesthetics, and (im)morality. There is legibility in Bressane’s disorder, direction in his visual vagrancy, and love in his brutality. How Bressane manages to dream up a cinema of such visceral brilliance remains a mystery, one of the best kept in film. His eyes have devoured the world; in the editing booth he has vomited up a cannibalized ecstasy that stinks of life. The Brazilian director is a roamer of the collective imaginary who prefers having his films watched multiple times by few people than once by many. The exact opposite of what a festival needs to survive, financially, spiritually, and otherwise.