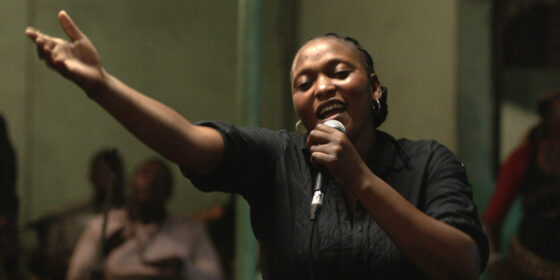 Alain Gomis’ first film since 2012’s Aujourd’hui unfurls leisurely, with a precision, patience, and sense of musicality, embodied on a somewhat literal level by the chansons sung by its magnetic protagonist. The set-up is slightly elemental, which may be the point: by night, Kinshasa native Félicité (Véro Tshanda Beya Mputu, a Congolese singer) belts out songs at a local club accompanied by the Kasai Allstars (a 25-member outfit, playing themselves), both to make a living and as something of a reprieve from looking after her teenage son, Samo (Gaetan Claudia). Samo gets into a motorcycle accident, breaks his leg, and requires surgery, and Félicité scarcely has enough dough to cover the medical costs. So our heroine sets about knocking on every door trying to raise the funds, bringing her face to face with a slew of characters who range from the generally less-than-helpful to a brutal (though not irredeemable) gangster type. The film eventually shifts gears and invests itself more deeply in a budding romance between Félicité and a hard-drinking, skirt-chasing mechanic who, against her better judgment, attracts her, and comes to represent the possibility of a semi-stable future.

Céline Bozon’s restless cinematography captures the crush of the daytime crowd just as deftly as it dips its toes into endless, allusive night, and Félicité alluringly oscillates from the high-energy, casually tragic reality of the street to the faintly phantasmagorical serenity of the nocturnal realm and back again. These two worlds are bridged by a wealth of music—both in the form of Félicité’s performances and Félicité’s top-notch soundtrack—effectively clarifying what’s at stake in Gomis’ film: a not-at-all corny case for art as an instrument of peace and a means of survival.