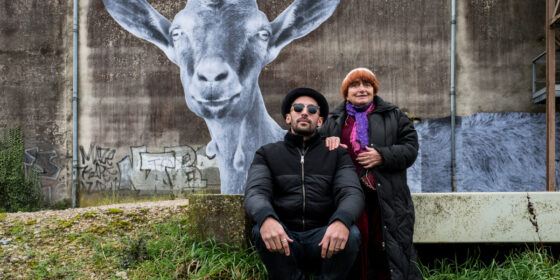 The unexpected kinship between 33-year-old visual artist JR and octogenarian Left Bank legend Agnès Varda is infectiously explored in Faces Places, the latter’s first feature since her 2008 personal-poetic landmark Les plages d’Agnès. Inspired equally by JR’s youthful joie de vivre and the large-scale photographic portraits he produces in his makeshift mobile photo booth, Varda enlists her young counterpart for an impromptu cross-country road trip through France. Along the way, the duo befriends a variety of locals and assorted lovable characters, whom they proceed to enshrine in enormous cut-out images and then plaster them on the sides of nearby homes and buildings. With its travelogue approach and interest in the iconographic potential of everyday people and places, the film plays as a quasi-sequel to Varda’s 1980 L.A. street-art classic Mur murs, which lovingly reflected the city’s cultural diversity through an under-recognized art form.

In Faces Places, Varda and JR take an equally inquisitive approach to their provincial settings and the personalities they encounter during their travels. There’s the church-bell ringer, the cheesemakers, the truck drivers, and even JR’s own aging grandmother, whom the two visit in a touching moment of multi-generational accord. Without dipping into sentimentality, the film casually accumulates an emotional magnitude that fills to bursting by its final two episodes. In the first, the spouses of a group of male dock workers are the subject of inquiry; their plight as the invisible support to not only their husbands but an entire industry is put in sharp relief as the women stand at the base of their 50-plus-foot-tall likenesses, which now decorate the port’s metal shipping trailers. But it’s the duo’s final visit, to the home of Varda’s former friend and artistic compatriot Jean-Luc Godard—whom the pair pay tribute to earlier in the film when JR pushes Varda in a wheelchair through the halls of the Louvre in loving homage to Bande à part—that finally brings a tear to the eye of our 88-year-old tour guide. It would be a shame to spoil the circumstances that lead to that tearful moment, but suffice it to say it amounts to one of the most bittersweet, affecting sequences Varda has ever captured.