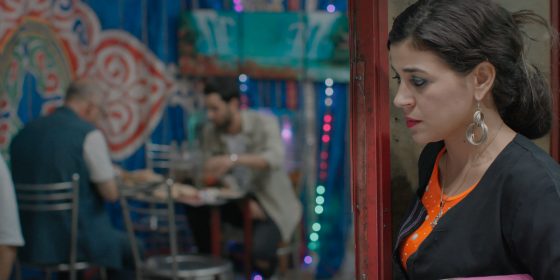 Although EXT. Night is not a particularly enjoyable film, credit is certainly due. Few movies are as successful in communicating the protagonist’s point of view to the spectator through structure and form. As you watch, you’ll wonder how Abdalla got you from the opening scenes, which so clearly promise an affable riff on the foibles of filmmaking à la Truffaut’s Day for Night (or for that matter, fellow Egyptian Youssef Chahane’s Silence…We’re Rolling) into an all-night trek with three mismatched characters in highly unpleasant scenarios.

Granted, depending on your cultural outlook, the majority of the film could play like a wacky romp, an Egyptian Preston Sturges folly in which young film director Mo (Karim Kassem) leaves behind his sheltered intellectual bubble and sees how the other half lives. He is chauffeured around the city by Mustafa (Sherief El Desouky), a devout lower-class taxi driver, with fellow passenger, charming young sex worker Toutou (Mona Hala) in tow. What Mo, and the viewer, discovers is that the working classes look at the cultural elite with a mixture of admiration and scorn, that women are hamstrung by the Madonna / Whore dichotomy, and that modern Egypt is largely controlled by a hierarchy of post-Muslim Brotherhood bullies.

Adballa, one of Egypt’s leading contemporary directors (Microphone, Heliopolis), has produced a somewhat self-serving piece of work, in the sense that his on-screen surrogate is the recipient of the majority of the abuse, despite the fact that almost everyone else on the social ladder clearly has a rougher time than he does. At the same time, there’s an eerie familiarity to EXT. Night, since it depicts an Egypt not all that different from the US under Trump. Religious hypocrites and petty martinets relish the chance to lord it over the folks just below them in the pecking order, and no one passes up an opportunity to “own the libs.”