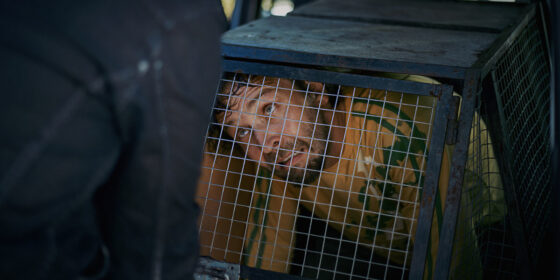 Since the old Vanguard section was put to sleep, Contemporary World Cinema is now forced to make room for films like Euthanizer, a bit of four-legged ugliness from Finland. The story of a clearly deranged yet moralistic factotum who offers to euthanize animals for a fraction of what the local vet charges, this is a film that keeps you on your toes, even as it appears to demand very little of its viewer. Veijo (Matti Onnismaa) is acting out of a true love and respect for God’s creatures, but as the film unfolds, we of course discover that his motivations run just a little than deeper than he lets on. There are psychic wounds at work, somehow tied to his dying father (Heikki Nousiainen).

Although Euthanizer might make a nice double bill with Matteo Garrone’s The Embalmer, it would certainly highlight the different paths to Creepytown. Director Teemu Nikki is going for B-movie gutter glory all the way, which makes Euthanizer’s tonal inconsistencies a bit jarring. What are we to make of a film whose climax (MAJOR SPOILER ALERT) has a character light a live dog on fire? (Obviously no animals were harmed, but still.) Earlier in the film, Veijo’s newfound sex life with his father’s nurse (Hannamaija Nikander) seemed to point to black comedy. Nothing prepared us for this final act of sadism, and it tends to sour the entire enterprise, as if Nikki is secretly aligned with his neo-Nazi villains in wanting to push the envelope just to see it fall.