My Entire High School is Sinking Into the Sea (Dash Shaw, US) — Vanguard 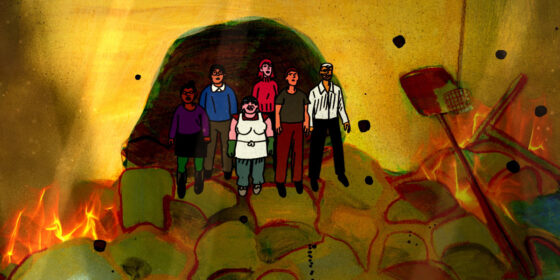 Any feature-film debut boasting a stacked cast of celebrities tempts us to conjure up the image of a big-deal producer calling in as many favours as possible. Yet detecting the reasoning for the number of marquee names involved in the freshman effort of comic-book artist/writer Dash Shaw perhaps derives from its script adhering so firmly to what seems like the Adult Swim Tradition of Quality for irreverent grown-up animation—which is not necessarily a bad thing, if only for such Bush-era favourites as Aqua Teen Hunger Force or The Venture Bros.

On their first day of sophomore year and finally ready to take high school by storm, two lifelong best friends defined by mutual dweebiness, Dash (Jason Schwartzman, eternally Max Fischer) and Assaf (Reggie Watts) go to work for the school newspaper. A rift forms when editor Verti (Maya Rudolph) takes a liking to Assaf, giving him solo assignments.  But just as Dash turns on his best friend, an earthquake threatens to turn the prophecy of the title into a reality.

From that point on, Shaw’s film shows more interest in comedically embracing action- and disaster-movie tropes than creating some kind of corny coming-of-age allegory regarding Dash and Assaf; the sheer number of violent deaths played for laughs is an indicator of a movie that doesn’t need to treat its characters with affection. This is a cartoon that knows it’s a cartoon.