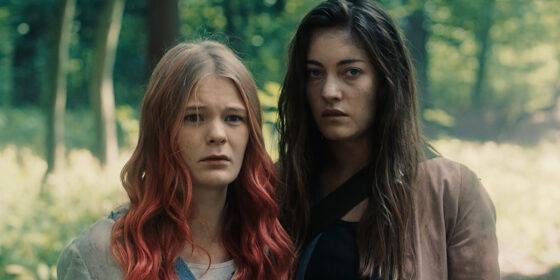 As each era’s monster reflects its larger cultural identity, the turn to the eco-zombie, in both last year’s The Girl With All the Gifts and now in Carolina Hellsgård’s ENDZEIT – EVER AFTER, presents us with an undead horror directly responding to humanity’s transgressions against nature. After this particular zombie plague, only two cities have survived, Weimar and Jena. In Weimar, the traumatized Vivi (Gro Swantje Kohlhof) decides to leave the hospital that has sheltered her to help wage the battle against the zombie threat. Clad in a white blouse with ombré pink hair (apparently a trend which will survive the end of civilization as we know it), Vivi is out of place amongst her more hardened peers, and her negligence leads to a zombie attack. The resulting casualties compound her guilt, leading to a suicide attempt and then a trip to Jena, where rumour has it the survivors have a “different way” of dealing with the undead. En route, Vivi teams up with the rugged and practical Eva (Maja Lehrer), much to the latter’s chagrin. Avoiding both external threats and internalized traumas, they plow on while the film around them hits its genre marks. As the two young women find only the remains of the people who came before them, they also begin to see how nature is taking over.

In Hellsgård’s film, the body manifests trauma, both the psychic ones of our human protagonists and also the guilt of a species. Zombies are nature’s revenge, Eva ruminates; humans haven’t paid the rent for long enough. The human body turns against itself, attacks its peers, but this is only one step in an evolution. With the chance encounter with The Gardener (Trine Dyrholm), someone neither human nor zombie, ENDZEIT – EVER AFTER forges a new path. The zombie apocalypse is the framework of a fairy tale, except here the ever after isn’t necessarily a happy one, but rather the end of one species and the birth of another.