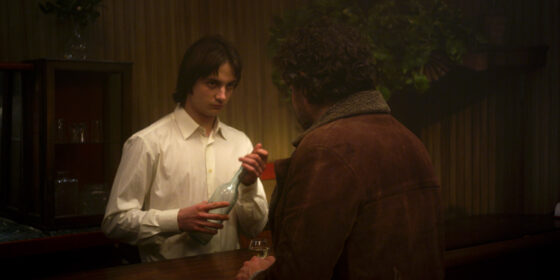 Eloy Enciso’s third feature unfolds as a series of conversations conducted at various locations within an unnamed city, most of which are public: outside a church, in a bus, at the bus station, in the bar, in the office of the prospective mayor. These conversations revolve around the current state of life, taking in politics, wealth, poverty, and how this present differs from the past—even if it’s initially difficult to pinpoint when all this is actually taking place, as both the images and dialogue are strangely bereft of obvious temporal signifiers.

The next segment sees one of the many previous speakers emerge as a protagonist of sorts and leave the city behind him, moving downriver and passing through snow-covered landscapes and shadowy forests, with each encounter along the way producing new accounts of suffering and violence, until at some point they are shifted into the voiceover. Over time, verbal and visual details proliferate to such an extent that the link to the Spanish Civil War becomes impossible to overlook, even as the film’s exact temporality remains in flux. This realization is accompanied by the growing sense that these speakers are not so much characters as vessels for other people’s words, which, as the closing titles indicate, are indeed taken from assorted documents from the era of the Franco dictatorship, including exile literature, personal memoirs, and letters written by those incarcerated in jails or concentration camps across Galicia. This idea of returning historical texts to the locations that birthed them and capturing the new sparks they give off places Endless Night in the tradition of both Ruth Beckermann’s The Dreamed Ones (2016) and Christian Petzold’s Transit (2018), which also draw considerable force from the constant friction between past and present.

If such films are coalescing into a nascent genre, Enciso’s unique contribution is the incorporation of landscape, across which history reverberates without leaving obvious traces. As the solitary figure moves through the trees in darkness—lent a solemn, spectral beauty by the camerawork of star cinematographer Mauro Herce—there’s nothing visible from the present to dissipate all the echoes set in motion by what the voice is saying, which progressively feels as crushing as this night is endless. This is then, but this is also now, in Galicia, Spain, and beyond. So much of what is said could be referencing any one or all three, at any given time, including what the beggar remarks before the church: “This is the worst world I know.”