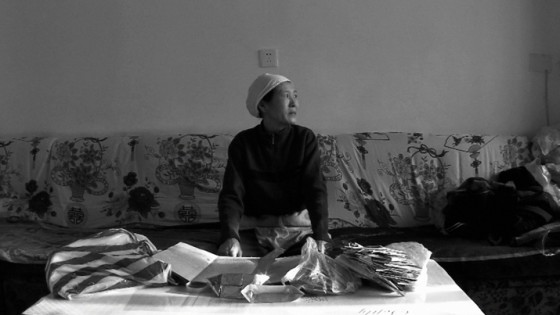 I’m not sure what the small clutch of filmmakers, buyers, distributors and other assorted festival-goers with a hole in their early-morning schedules got out of Jan Rofekamp’s presentation at RIDM’s market. Armed with a laptop containing short clips from about a dozen recent documentaries, the Films Transit International honcho didn’t so much deconstruct the art of crafting an opening sequence for a non-fiction film—the ostensible point of his talk—as trumpet the quality of his company’s catalogue. When pressed on his points during the Q & A, he wasn’t much more enlightening. Asked about what he thought of the opening shot of Jennifer Baichwal’s Manufacturing Landscapes (2006)—surely one of the great curtain-raisers of the last decade—the Dutch sales agent responded that it was very long. He added that the director should have maybe prepared an alternate cut to appease impatient broadcasters: “Television is very fast.”

Having not attended any of the other market events at RIDM, I can’t say whether Rofekamp’s commitment to speedy commercial imperatives was the order of the day. Fortunately, the festival’s programming team, headed by Roxanne Sayegh and Charlotte Selb, has a little more faith in its audience—and in the virtues of slow(ish) cinema. While some of the films on display fell under the heading of slickly tooled crowd-pleasers—like Jon Foy’s well-travelled Resurrect Dead: The Mystery of the Toynbee Tiles, a middling Unsolved Mysteries episode dragged out to 85 minutes—there also were a healthy number of titles that subverted expectations in terms of format, subject matter and duration. Or, as in the case of Xu Xin’s monumental Karamay, all three at once. It’s telling that this urgent and courageous piece of political cinema found a home at RIDM after being bypassed by Hot Docs.

Not that there weren’t plenty of leftovers from Canada’s biggest documentary festival to pick over, from David York’s Wiebo’s War, a tough-minded profile of the accused Albertan oil-pipeline bomber, to Tristan Patterson’s exquisitely lensed and surpassingly irritating Dragonslayer, which proves that you don’t have to be an interesting person to get a documentary made about you. One Canadian film I’m glad I caught up with is Tess Girard’s A Simple Rhythm, a deceptively free-form meditation on everyday synchronicity. The superb digital cinematography melts the various Toronto backdrops into colour-coded blurs (a glimpse of traffic lights coruscating off of telephone wires is particularly gorgeous) but Girard’s narration is similarly measured and precise. One of the nice things about this study of patterns and progression is that it doesn’t overstate the connections between its images. A view of a coffee cup cosmos conjures Godard, of course, but the film’s true guiding spirit is Peter Mettler, whose work is resembles without being simply imitative.

Two other notable titles were Canadian premieres: Jeff Silva’s Ivan and Ivana and Hermes Paralluelo’s Yatasto. Silva, a teaching assistant at Harvard’s Sensory Ethnography Lab, builds his film out of the material from Balkan Rhapsodies: 78 Measures of War (2008), a record of his time spent in Serbia and Kosovo in the wake of the NATO bombings. The film opens with a clip of its eponymous, twenty-something male protagonist finger-picking some “Serbian blues” on an acoustic guitar; one hard cut and six long years later, Ivan has relocated to sunny San Diego with his sexy and self-possessed wife. “We’re true Americans,” says Ivana ruefully when confronted with Silva’s camera. “We’re up to our eyeballs in debt.”

She’s not kidding: despite the relative comfort of their new surroundings (which, as Silva leaves smartly unsaid, look like literal Paradise compared to their bombed-out homeland) Ivan and Ivana are house-poor to the tune of $1.5 million dollars. That’s a tough hole to dig out of, and soon Silva’s subject shifts from the perils of cultural assimilation to the real-time dissolution of a loving and long-term relationship. Ivan and Ivana is intimate but not intrusive: it’s obvious that its subjects trust the director as a friend, and his access remains constant even after they split up. Silva admits that he was hoping for a more triumphant trajectory, and yet Ivan and Ivana is an example of adroit documentary filmmaking chiefly because of how he’s able to go with the flow. (Compare his control of the material to Mia Donovan’s aimless piggybacking in Inside Lara Roxx, a doc about an HIV-positive Montréal porn star who becomes an increasingly wary participant in the filmed story of her sad life). By the time Ivan and Ivana circles back to the Balkans, the sad poetry of the situation feels discovered instead of designed in advance.

Yatasto takes more time to grab the audience. Chances are Rofekamp might find its opening shot, in which the flickering embers of a trash-can bonfire gradually illuminate an impenetrably black nighttime, “too slow.” It is slow, but it’s also authentically beautiful, and it announces Paralluelo’s formalist intentions. Set in the suburbs of Cordoba amongst a family of cartoneros—waste-pickers who trawl through trash in search of recyclable materials—Yatasto is short on exposition about the economic crisis that forced 25,000-30,000 Argentines below the poverty line. Instead, it simply observes its characters at a thoughtful close proximity. Paralluelo’s true aesthetic coup are the recurring fixed long takes with the camera mounted on the front of the cartonero’s horse-drawn cart as it careens through city streets; these shots, which recall the centrepiece set-up of The White Ribbon (2010), allow us in on the various jokes and arguments between the characters (a trio of children profanely debate the source of a fart for about five minutes) while also showing the strange integration of this ancient subaltern group into a bustling modern context.

Paralluelo’s camera-on-the-cart-before-the-horse conceit is more successful than the relentlessly roving camerawork in Sundance Jury Prize winner Position Among the Stars; having not seen the previous two installments of Dutch director Leonard Retel Helmirch’s trilogy about a multi-generational Indonesian family, I can’t say whether the ostentatious visuals are a carry-over, but right from the first trompe l’oeil tableaux of dewy grass blades, I felt like I was at the mercy of a filmmaker instead of on his wavelength. When the camera goes racing along baseboards in harmony with a skittering cockroach, or follows a massive rat into a fetid sewer, it’s like Helmrich is trying his best to shoehorn virtuosity into the strictures of vérité.

A less jarring example of self-consciously impressive image-making would be Russian director Michal Marczak’s accomplished first feature At the Edge of Russia. This glistening picture suggests Beau travail (1999) crossed with The Thing (1982), but absent homoeroticism, Turkish dance music, and mutating space aliens. Banished to a remote and useless military outpost erected to pretext against Northern incursions, its sextet of Soviet soldiers run manoeuvres, arm wrestle, perform traditional dances (with knives!) and basically stand in for an absurd but deeply entrenched patriotism; Marczak, who knows what he’s doing, compassionately frames their commitment as a state of stir-crazy grace.