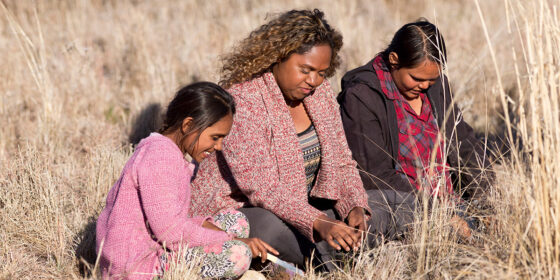 The result of a 15-year-long collaboration between first-time director Imogen Thomas and members of the remote New South Wales community of Brewarrina, Emu Runner struggles to strike the right balance between collective art-making and authorial command. In spite of this, 11-year-old Rhae Kae Waites commands the screen with a soft yet precocious grace as Gem, a young girl who has taken to bonding with a wild emu in the wake of her mother’s sudden death. Seasoned actor-director Wayne Blair (The Sapphires) plays Gem’s father, who struggles to fill the parental void left by his late wife. With a cast culled largely from the Brewarrina community, Blair offers a steady centre around which the local performers feel out their individual ranges and tones—a quality which keeps the film more realist than put-on and grounds its often times patchy lyricism.

The collaborative nature of Thomas’ project shows in certain moments, but far too often the film stalls out due to lack of a stronger directorial construction. (There’s also an unfortunate parallel between a naive and idealistic social worker self-charged with Gem’s well-being, and the director herself.) Perhaps the film’s greatest fault is that it takes more than it gives back, leaving one to wonder how Emu Runner would have fared under the direction of an Indigenous filmmaker.