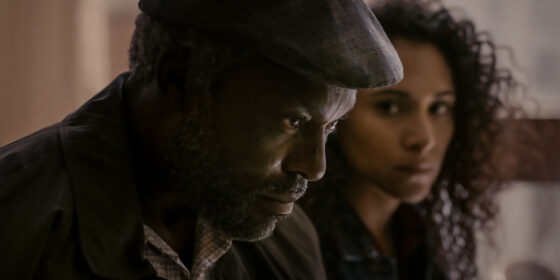 There are only so many variations on the “watching a family member slip into dementia” story. This is a difficult truism to volley at any work of art, precisely because as each of us experiences that painful eventuality—and more and more of us will, given the rapid greying of our Baby Boomer parents—it feels so particular. It’s not, of course: the specific outbursts, a particularly embarrassing accident in a public place, or just one momentary facial expression of confusion and helplessness—these all feel very private, because the minor details are the parts of the scenario that retain the sting. At the same time, those minor details are also precisely what don’t matter in our story, what we hold onto in order not to relate our mundane situation to everyone else’s.

The Empty Box is the second film by Claudia Sainte-Luce, whose debut was the quite charming The Amazing Catfish (2014). While there is no sense conjecturing just how personal this project is for her, it’s worth noting that Sainte-Luce plays the lead character Jazmin, who is eking out a living in Mexico City when she learns that her father Toussaint (Jimmy Jean-Louis) has had an accident. She soon learns that he has vascular dementia and will need constant care. The two have been estranged, and occasional flashbacks show him to have been a harsh, critical patriarch. An illegal Haitian immigrant, he was obsessed with Jazmin working hard to secure a better life for herself, but his tough love had mixed results.

Sainte-Luce does a fine job melding past and present in accordance with Toussaint’s mental slippages, and in a tragicomic twist of mise en scène, Jazmin’s “nice” apartment is only slightly better than the filthy hoarder’s den where Toussaint had been staying. But The Empty Box has precisely the trajectory one would expect from such a film, and if anything, Sainte-Luce’s directorial approach softens the genuine horror and disorientation of late-stage dementia. It isn’t graceful like an Alain Resnais film, although if the director is indeed drawing on personal experience (again, who knows?), then I am happy for the relative peace depicted here.