The Edge of Seventeen (Kelly Fremon Craig, US) — Gala Presentations 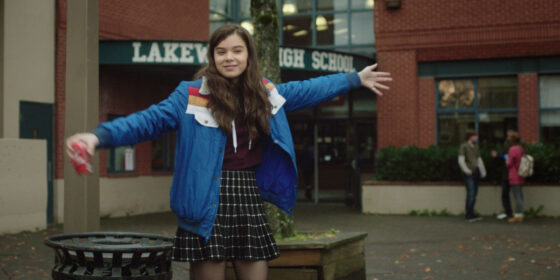 Since few grieved over the demise of the dead-end genre known as the High School Comedy, it’s hard to fathom the purpose behind debuting writer-director Kelly Fremon Craig’s gambit to revive it with The Edge of Seventeen. But because James L. Brooks is backing it as producer and Hailee Steinfeld—currently best-of-show among American teen actors—is the star, there might be something going on here.

What’s going on is that we’re a long, long way from John Hughes. Hughes’ lovingly rendered tales about suburban kids trying to make sense of life is the model here, but Craig hasn’t thought through her material. Steinfeld’s Nadine is basically a Martin Scorsese character as a high school junior, a repellant, self-absorbed monster-in-the-making who is supposed to be our rooting interest. Like most of Scorsese’s heroes, Nadine narrates her way into the viewer’s brain like a jackhammer, spouts a plethora of bullshit, craps on everyone else including her mom (a frazzled Kyra Sedgwick) and teacher (a kick-back funny Woody Harrelson), and won’t stop. At least she doesn’t have a gun.

Now, it is indeed pretty low of her one and only girlfriend (Haley Lu Richardson) to decide to go all wobbly in the knees for, of all the cute dudes out there, Nadine’s goody-goody jock of a brother (Blake Jenner, as perfectly cast as everyone else is) with whom Nadine is engaged in a lifelong war that she’s badly losing. But Nadine’s response, though not at the level of Travis Bickle, is pretty ridiculous. For all that, it beggars belief that someone with Nadine’s kind of wisecracking humour (she does have that going for her) couldn’t find a niche or clique in school. Steinfeld herself is charismatic and brimming with energy, and delivers a performance that’s much richer than the movie is or deserves. The test of a real actor is excelling in a failed project, and Steinfeld aces it.