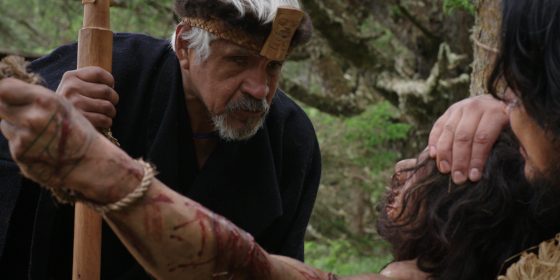 The first feature film produced in the Haida language, currently spoken by upwards of 20 individuals, Edge of the Knife is notable simply as a cultural survivance project. If there should come a time when Haida is no longer a living language, the film may serve as a kind of Rosetta Stone for future generations, a record of phrasing and conversational cadence. Not many films can be said to bear such a potential historical burden: this exists quite apart from the usual issue of the scandalous dearth of First Peoples’ productions and representation in cinema more generally. But how exhausting to bear that burden, to not simply be able to tell your own stories and have them taken as individual creative acts, aesthetic objects that also exist for their own sake. Regardless of how important Edge of the Knife may be, it is a cracking good tale, expertly told and beautifully executed. Organized around a fraternal struggle that is both intimate and elemental, Gwaii Edenshaw and Helen Haig-Brown’s film will remind many of Atanarjuat in its raw narrative power. (Zacharias Kunuk is an executive producer on Knife.)

Kwa (William Russ) and Adiits’ii (Tyler York) are good friends from different clans who come together during the height of fishing season. Adiits’ii is a surrogate uncle to Kwa’s son Gaas (Greg Brown), although Kwa’s wife Hlaaya (Adeana Young) worries about his influence. After a tragic accident, Adiits’ii vanishes into the wild, and it soon becomes clear that he is intent on punishing himself, scourging his body in spectacularly brutal fashion not only to atone for his role in the accident, but to abandon his humanity altogether. In the end, Kwa must decided whether to seek revenge on his brother, or bring him back into the fold.

Although Knife takes place in the 19th century, there is a propulsive, modern immediacy to the film, mostly owing to its use of close-ups and mobile cinematography and crisp Pacific Northwest vistas. The performances—particularly that of the wildly charismatic York—are pitched between the ritualistic and a more recognizable naturalism, often tinged with unexpected humour. As mythic as Edge of the Knife can be, it never fails to exist on a basic human scale, where every life is sacred and no one is beyond redemption.