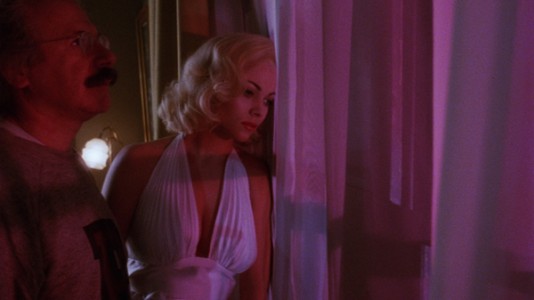 Nicolas Roeg began his directing career only after working for more than two decades as a focus puller, camera operator, and eventually cinematographer for the likes of David Lean, Richard Lester and François Truffaut. Yet what was already clear by the time of Walkabout (1971), his solo directorial debut and penultimate credit as cinematographer, was that Roeg’s striking directorial signature was grounded in editing, in the dismantling and reassembly of his immaculately crafted images in sequences that sacrificed causal narrative fluidity for a radical adherence to the unconscious or instinctive associative patterns of his characters’ psyches. While it’s difficult to imagine Roeg’s studies of sexual obsession existing before the temporal puzzles of Alain Resnais’ L’année dernière à Marienbad (1961) and Muriel (1963)—not to mention the cut-up technique devised by Brion Gysin and William S. Burroughs—there is no single precedent for Roeg’s particular brand of corporeal cubism or collage as narrative crust. Flashing forward and backward with abandon, Roeg’s impulse to break every scene apart and spread the shards around can lead to realizations either profound, cryptic or banal; it’s an all-inclusive approach, and one whose success is finally as contingent on the quality of the source material as any conventional film.

The material (which is to say the genres, stories and themes) of his first decade as director—Walkabout, Don’t Look Now (1973), The Man Who Fell to Earth (1976) and Bad Timing (1980)—appears to have addressed the subjects that resonate most with Roeg: the abysmal side-effects of civilization, the endurance of the uncanny in modern life, the terrifying entropy latent in romantic love. (Fittingly, this formidable quartet of films closes with the first of several collaborations with Theresa Russell, the much-younger actress Roeg would marry and have two children with.) But the projects Roeg pursued after Bad Timing suggest fatigue. By the time of Insignificance (1985), now available on DVD and Blu-ray from the Criterion Collection, you might wonder if his mosaic-like method was being employed for its own sake. Based on the stage play by Terry Johnson, Insignificance depicts one night in March of 1954 in a New York hotel room inhabited by Marilyn Monroe (Russell), Albert Einstein (Michael Emil), Joe DiMaggio (Gary Busey) and Joseph McCarthy (Tony Curtis). Or some version of them, anyway: the names they’re given in the credits—the Actress, the Professor, the Ballplayer, the Senator—suggest archetypes, yet with the possible exception of DiMaggio we’re dealing with icons of an absolutely singular stature, and there is virtually nothing iconoclastic or even unpredictable in Johnson’s rendering of them. The coyness surrounding the characters’ names is indicative of Insignificance’s modus operandi, a pendulous swinging between the extremely specific and the mythical or downright vague.

Johnson scripted his own adaptation, and together he and Roeg “opened up” the stage-bound, single-location source material through several sequences that occur outside the Professor’s room. Some of these, such as the shooting of the famous scene in The Seven Year Itch (1955) in which Monroe’s skirt is blown up by air blasting from a subway grate, are hardly inspired, but do serve an expository purpose; others, such as the multiple cutaways to the Ballplayer getting drunk and agitated in a bar (seated next to a flamboyantly anachronistic David Hockney photo-collage of Monroe), seem thrown in to the mix mostly to kill time and check in with the film’s least developed character. More significantly, Johnson and Roeg attempt to counteract their source’s theatrical linearity through the director’s trademark editing patterns, which include subjective flashbacks, visions or dreams of the Actress, Professor and Ballplayer. Again, in the case of the Ballplayer these flashbacks (which depict the fledging Ballplayer simply playing ball) seem utterly redundant, yet even those applied to the Professor (visions of the aftermath of the bombings of Hiroshima and/or Nagasaki) and, to a lesser extent, the Actress (memories of humiliating auditions) feel less than essential to the fabric of this fabulous convergence of 20th century celebrities and bogeymen. The mosaic approach feels more like distraction than it does a source of enrichment. By contrast, the film’s most memorable and evocative scene, where the Actress demonstrates the Theory of Relativity to the Professor using a few simple props, is also its most sustained and focused—that is, the least interrupted by unneeded ruptures.

One thinks of another stage-to-film adaptation from the same period, Robert Altman’s Secret Honor (1984), and the power it exerts by trusting its lead actor to hold our attention absent any obtrusive “cinematic” effects to remind us that we are, indeed, watching a film. Transposing a play to film is not a matter of trying to efface theatricality, but of making it a cinematic element in its own right. Indeed, filmmakers as diverse as Jacques Rivette, Manoel de Oliveira, Henry Jaglom, Ingmar Bergman and Pedro Costa have imaginatively incorporated theatrical devices (such as unbroken, straight-to-camera monologues) into films that aren’t even theatrical adaptations.

While not without interest (and by no means the nadir of stage-to-screen adaptations), Insignificance offers an unusually instructive example of how even the most ostensibly dynamic, inherently cinematic narrative techniques can not only fail to create a compelling bridge between disparate media, but actually sabotage the pursuit through misdirected ambition. Roeg’s finest, most haunting work presents us with puzzles that, when pieced together, may resolve certain plot-centered mysteries only to conjure new and deeper ones that linger outside the borders of the narrative continuum. In comparison, Insignificance’s playing with temporality and subjectivity, its attempt to make the material strange, dilutes an originating work premised precisely on the strangeness of the familiar, on the mad and even terrifying interconnectedness of 20th century history; it’s calculated misdirection with little in the way of greater purpose.