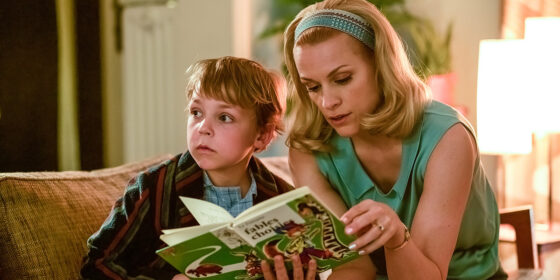 Or, Bad Mamans. There’s a genuinely intriguing idea at the centre of Duelles, in which a pair of suburban mothers as well-manicured as their respective lawns engage in an escalating game of psychological warfare (and worse) in the wake of a tragedy that, in the eyes of the suffering party, could not only have been avoided but perhaps was perpetrated by her supposed best friend. But Olivier Masset-Depasse isn’t a filmmaker of ideas, at least not here. What he’s got instead is plot. And so Duelles’ lukewarm pot runneth over with the sort of ridiculous contrivances that can’t be redeemed—or even all that well disguised—by either the carefully mannered acting styles of the leads or a self-consciously glossy, quasi-Ozonian aesthetic that puts everything in air quotes. It takes a certain kind of shamelessness to traffic in child endangerment for genre kicks, and even if Duelles does eventually earn its bleak, wry irony in a fine final sequence, the overall effect borders on obnoxiousness.