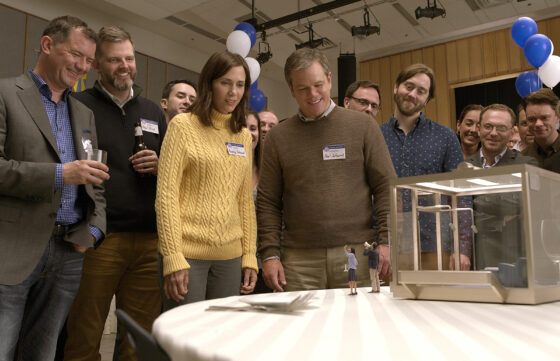 After exploring the road-trip genre for nearly two decades (in About Schmidt, Sideways and Nebraska), Alexander Payne now embarks on a radically different and more ambitious project: a sci-fi environmentalist tale set in a world where humanity seeks to solve the overpopulation crisis by shrinking people to five inches tall. Downsizing follows Paul Safranek, a classically Payne-ish Omaha everyman played by a low-key Matt Damon, who persuades his wife to join the small people’s world, where scientists assure the populace that their impact on the planet will be significantly reduced. But when the day of the couple’s shrinking comes, Paul wakes up alone: his wife changed her mind at the very last minute, leaving him to inhabit a fairy-tale, Gulliver-like universe where everything is reduced, but the dramas and sorrows feel just as big as they do in the normal-scale world.

Downsizing touches upon some heavy themes (overpopulation, climate change, the economic crisis), and there are moments when Paul’s miniaturized life hits some off-putting melodramatic lows, but Payne aficionados will be relieved that the same irony that permeates the director’s previous works always kicks in when it is most needed. Much of it comes courtesy of a scene-stealing Christoph Waltz as Dusan, a Serbian thug living la dolce vita smuggling minuscule cigars. (“People become small to have the things only the rich could afford,” he comments.)

The film works best when Payne exposes the egotism and self-righteousness of the small-world denizens; where it stalls a little is when the critique threatens to turn the whole feature into a moral parable, slowing the pace and keeping the audience at arm’s length. Paul’s Fantastic Voyage may seems miles away from Payne’s previous efforts, but Downsizing regards its characters and their alienation with the same compassionate eye as its predecessors—and its chuckles leave the same lasting, slightly bitter aftertaste.