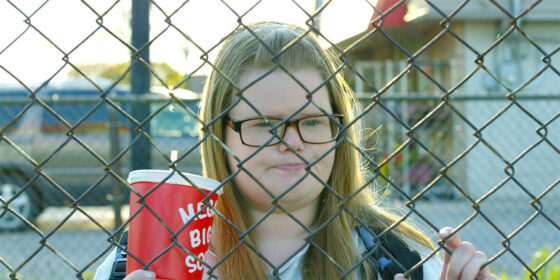 After the dark pleasures of his debut feature Guidance, writer-director Pat Mills wanders into the deep Toronto suburban bush with his considerably less funny follow-up Don’t Talk to Irene. High school seems to be Mills’ bailiwick: Guidance took school counselling to extreme, twisted places, mining good sources of satire; Don’t Talk to Irene looks at a plump girl with certain porcine tendencies (Michelle McLeod), whose dream of being a cheerleader seems thwarted when she must do community service in an old folks’ home after a school scuffle. Her only friend is Geena Davis (literally played by Geena Davis), who she imagines speaking to her from a ceiling poster of A League of Their Own. Irene’s sour mom, a former cheerleader herself whose only ways of coping with her ugly-duckling daughter are either overprotectiveness or sheer spite, is the Lousy Adult stick figure typical of the genre. And, of course, there’s the Bitchy Blonde, whom the genre demands must stand in Irene’s way.

Inspired by Geena—who finally makes a curious appearance with Irene, dancing around in a black-box space of the girl’s imagination—Irene overcomes all by recruiting a group of grumpy retirees to form a cheer squad to compete on a Canadian TV talent show. All of this allows Mills to exercise what seems to be his prime interest, which is to write sarcastic dialogue, even if it’s barely funny: Irene is variously compared to rabies, the fecal matter you can’t see in a motel room without an infrared light, and a dog’s asshole that puckers up when the dog barks. Tune out all of this crap, though, and look at Mills’ carefully selected lower-middle-class locations, and you’ll see a documentary of the kind of place where a lot of Canadians live, but which is seldom shown on the big screen.