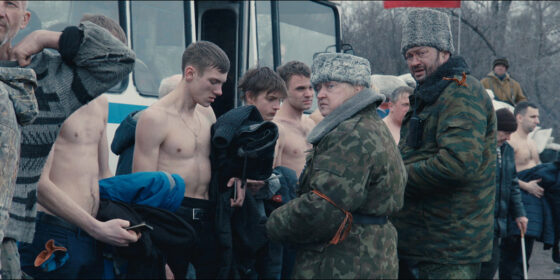 At first glance, Sergei Loznitsa’s new film—unlike his previous, intricately plotted voyages to Hell such as My Joy and A Gentle Creature—seems like a scattershot series of vignettes, but eventually, Donbass’ near-Buñuelian episodic structure (in interviews, Loznitza cites The Phantom of Liberty as an influence) acquires a cumulative power. Adopting a superficially matter-of-fact approach that merges the observational style of Loznitsa’s documentaries with the absurdist veneer of his features, the film offers an immersive glimpse of political turmoil in the Donetsk People’s Republic, a “proto-state” in eastern Ukraine occupied by the Russian military.

Loznitsa’s scabrous portrait of Donetsk depicts a society riven by paranoia, a capricious bureaucracy, and a perpetually angry populace. An early sequence features a bedraggled group of citizens, ostensibly victims of wartime strife, who become part of a transparently fraudulent documentary in which ordinary citizens become actors compelled to condemn “fascist” betrayals. A more Rabelaisian moment highlights a woman who, after being assailed for accepting bribes, attacks her accuser with a bucket of excrement. The most harrowing sequence focuses on a handcuffed man detained in the street, where angry passersby hurl abuse and condemn him as a traitor.

Donbass proves troubling, and somewhat disorienting, because a coherent analysis of the political morass in Donetsk is forestalled by an emphasis on the rampant nihilism on both sides of the conflict; it’s even occasionally difficult to distinguish Ukrainian nationalists from Russian interlopers. Venality rules, and gallows humour is apparently the only available antidote to pervasive corruption and political malfeasance.