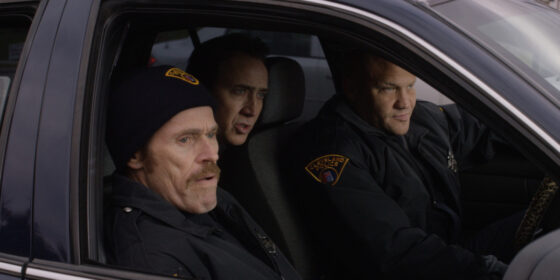 It requires a unique level of creative autonomy to make a film as gleefully uninhibited as Dog Eat Dog. Luckily for director Paul Schrader—who couldn’t quite maintain the precarious balance between financial and artistic considerations with his previous film, the recut and subsequently disowned The Dying of the Light (2014)—he’s been granted that freedom with his latest feature, a feverish pillaging of classic and contemporary crime that plays at once like a pastiche of its stars’ many low-rent gangster personas and a cri du cœur for auteurist conviction.

The plot, based on a mid-’90s pulp novel by Edward Bunker (Mr. Blue from Reservoir Dogs [1992], one of the film’s many allusions to early Tarantino), essentially amounts to a succession of set pieces that hurl the volatile team of Troy (Nicolas Cage), Mad Dog (Willem Dafoe), and Diesel (Christopher Michael Cook) through a regimen of genre machinations—the botched kidnapping, the Vegas bender, the home invasion, the suburban shootout––each impressively realized on a noticeably modest budget. Following the film’s premiere at this year’s Quinzaine, Schrader immediately stated that the film should in no way be taken seriously—not that any sensible viewer wpuld be left in doubt following an opening sequence in which Mad Dog slaughters his obese ex and her adolescent daughter in a colour-filtered massacre to stand alongside the most ostentatious moments in Natural Born Killers (1994). With any ties to realism instantly severed, the true pleasures of Dog Eat Dog––namely Schrader’s wily and inventive visuals (not to mention his cameo as a bawdy mob boss) and the actors’ hedonistic displays of brute masculinity––can be savoured for all their perversely parodic thrills. This is cinema that answers to nothing but itself.