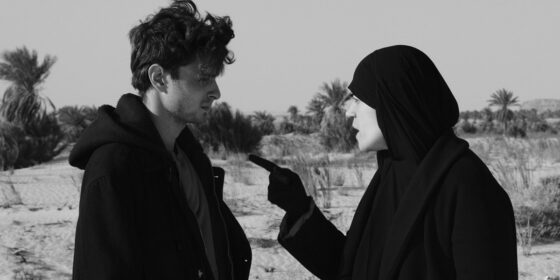 The latest film from veteran Algerian director Merzak Allouache is tonally strange. Quiet and stilted, it exhibits an overall seriousness that’s firmly in keeping with its subject: suicide bombers and the warped ideologies that drive them on. At the same time, there is such an exaggeratedly fraught relationship between the two main characters that, held at a slightly different angle, Divine Wind could possibly play as the blackest of comedy.

Amine (Mohamed Oughlis) is a twenty-something naïf who seems to have backed into the jihad with his eyes wide open, far more committed to maintaining the illusion (or more) of normalcy than in taking orders for guerilla action. His handler, Nour (Sarah Layssac), meanwhile, is more than no-nonsense. She seems to take a kind of sadomasochistic pleasure in the life of the terrorist, beating Amine down like a dog and denying herself even the most fleeting of pleasures. (One scene, in which Nour momentarily admires a pair of sparkly shoes, is particularly amusing.) This is a relationship story of sorts, with death looming as its endpoint. (“Divine wind,” of course, is the literal translation of kamikaze, and how many couples could such an epithet apply to?)

Once it becomes clear that Amine does not really want to blow himself up, Nour is not above using sex as a weapon. This leads to all sorts of confusions, among them Amine’s stirring feelings for the older woman, and Nour’s even greater commitment to a headlong rush into death. Although Allouache occasionally brings in larger political concerns—i.e., the Algerian police as “apostates,” and eventually a major character’s ties to ISIS—Divine Wind is essentially a two-hander about someone who is completely finished with life, and someone else who hasn’t really lived at all. Thrumming in the background, providing a solid material basis that the story sometimes lacks, is the exquisite black-and-white cinematography by Mohamed Tayeb Laggoune, crisp and contrasty enough to make Ansel Adams weep.