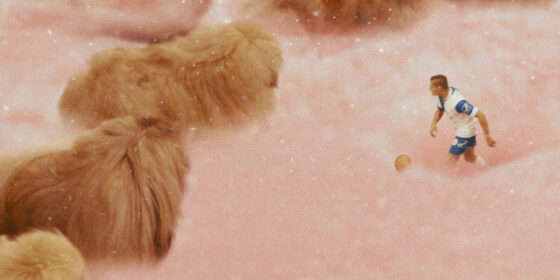 “The story, all names, characters, and incidents seen here are fictitious. No identifications with actual persons (living or deceased), places, products, genetic procedures or giant puppies is intended or should be inferred. No animals were harmed in the making of this film.” Thus reads the seemingly obligatory, hilariously backhanded legalese that opens Diamantino, the latest collaboration between Wavelengths denizens Gabriel Abrantes and Daniel Schmidt. Making the transition to Midnight Madness with relative ease, Abrantes and Schmidt broach issues such as the refugee crisis, neo-fascism, and surveillance technology with a camp concoction that effortlessly flattens this tapestry of topicalities.

Contrary to what the epigraph might have you believe, Diamantino Matamouros (Carloto Cotta) bears a striking resemblance to another Portuguese footballer of note, not only for his on-field theatrics, but also for his proclivity to choke under pressure. With a minute left in the World Cup final, Diamantino misses the penalty kick that would’ve tied the game and sent Portugal to overtime, ending his career and his father’s life—through spontaneous cardiac arrest—in one fell swoop. Ashamed and despondent, he turns to philanthropy for solace, unwittingly adopting a Cape Verdean refugee named Rahim, who in actuality, is Aisha (Cleo Tavares), a lesbian secret agent sent to investigate his taxes.

Pitched halfway between the candy-coloured nihilism of Richard Kelly’s Southland Tales (2006) and the absurdist hijinks of queer classics by John Waters, Abrantes and Schmidt’s genre- (and gender-) bending film takes place in a 2018 dystopia where everything— decadence and poverty, mass migration and high-stakes football—is reduced to formal values like colour, texture, and tone. In this context, worldwide cataclysms might as well be as exotic, transportive, and fantastic as the visions of calming, skyscraper-sized puppies Diamantino experiences while on the field; they too, reduced to their aesthetic properties, are sensations, looks, things to be experienced as one does any other activity of one’s life. To paraphrase Godard, we have no more just images. Alas, we just have images.