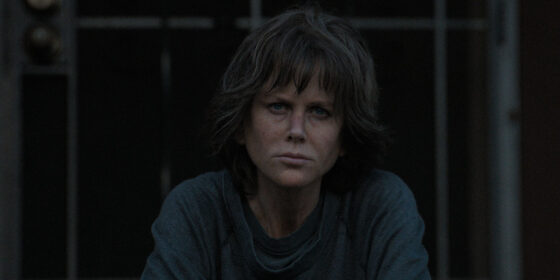 Playing a weathered LAPD lifer in Destroyer, Nicole Kidman looks like she’s been Dragged Across Concrete; her Erin Bell is the kind of hard-driving, harder-drinking detective who sleeps in her clothes in her car and flips off superiors at the scene of the crime. In other words, she’s a cliché, and if there’s any deeper merit in Karyn Kusama’s super-sized and carefully crafted thriller, it lies in the way it both inhabits and inverts cop-movie commonplaces. It’s not simply that the director has made a distaff Bad Lieutenant (one of several serve-and-protect classics alluded to visually and narratively, alongside Point Break and Heat), but that she uses Erin and her anything-but-idealistic, strictly off-duty pursuit of a recently resurfaced bank robber to defamiliarize—and re-contextualize—the kind of “principled” anti-heroism inscribed by those vaunted alpha-male entertainments. It’s not the subtlest creative agenda, perhaps, but that doesn’t undermine its efficacy in a cultural moment that demands and rewards such incursions.

Intricately written, superbly shot, and at least 20 minutes too long (another Michael Mann connection!) Destroyer doesn’t quite ennoble the prestige-genre model it aspires to, but it doesn’t disgrace it, either, and the same can be said for Kidman’s acting, which gives off some of the signals of a stunt—even more so when you realize the script’s parallel flashback structure depends on her also playing Bell as a twentysomething rookie—but gradually accrues the force and dimension of a major performance.